Posted by: Robert Caston December 19, 2019 in Parks and Recreation 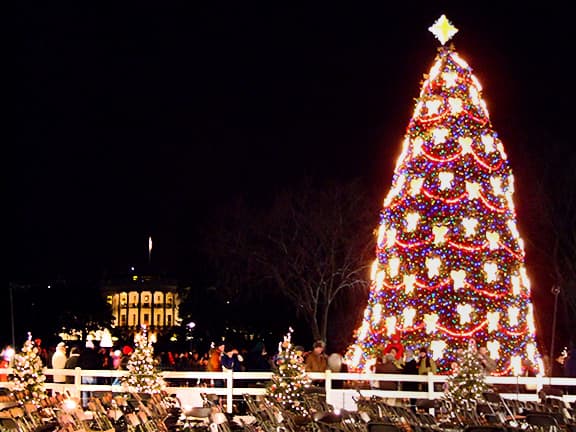 The National Park Service oversees the installation of the National Christmas Tree and the lighting ceremony. (NPS photo)

Many people might not know this but one of the duties of the National Park Service, in addition to taking care of ALL 419 of our wonderful national parks, is to oversee the National Christmas Tree.

The massive tree is located in the Ellipse at President’s Park near the White House South Lawn.

The park is outside the White House fence and in an open area accessible by the public. It’s free for the public to visit the tree.

This year, the tree is a 30-foot Colorado Spruce from Palmyra, PA. In addition, there are 56 smaller trees surrounding the big tree. They are adorned with some very unique one-of-a-kind ornaments.  These are not store-bought ornaments. They were created by students across the country.

Those trees are meant to represent every state, territory in the US, including the District of Columbia.

The National Park Service worked with the US Department of Education to identify elementary, middle and high schools whose students could create ornaments. Reportedly 1,500 students were involved in the project.

Traditionally, the lights for the tree are designed and provided by a very popular US company – General Electric.

Every year since 1923 the NPS has organized an official tree lighting with the current president of the United States. That holiday ceremony is usually accompanied by a number of musical acts.

Of course, the popular United States Marine Band will be performing as they do most years. In fact, the band performed for the first tree lighting ever.

Musical acts are scheduled after the lighting for several days until Christmas. The lights on the tree will stay on until January 1st.

Tickets to the official lighting event are also free, but are distributed via a lottery system. The application process usually starts in October.

Another tree, a 60-foot blue spruce, was lit in a ceremony at the U.S. Capitol earlier in the week. 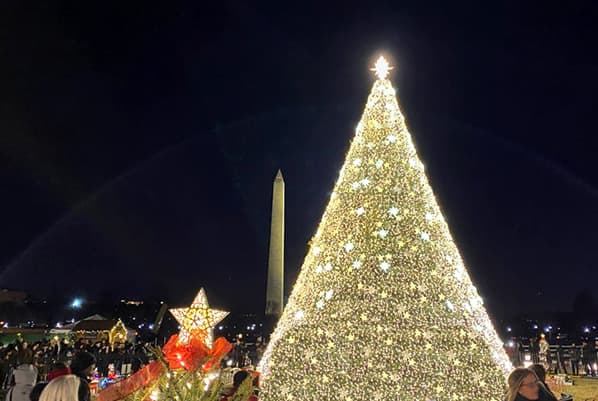 What’s amazing is that the National Christmas Tree lighting event has been held consistently, even through world wars, for 97 years.

President Calvin Coolidge was the first president to light the tree. His wife, First Lady Grace Coolidge had asked the District of Columbia Public Schools to erect the tree on the Ellipse to start the tradition.

The first tree was a 48-foot Balsam fir. It was decorated with 2,500 electric red, white and green bulbs.

Coolidge walked from the White House to the park and officially pushed a button to start this beloved American tradition.

Since then, every U.S. president has pushed the switch to light up the tree.

The National Park Service, with assistance from its non-profit partner, The National Park Foundation, was put in charge of caring for the White House and surrounding grounds in 1933. The Ellipse and nearby Lafayette Park were officially included in the national park system in 1961.

As you may know, The National Park Service is a busy department in the federal government. The department has 20,000 employees and a large number of volunteers. They work to manage and protect more than 84 million acres of national parks that all Americans get to enjoy. Those lands also attract millions of tourists (and their dollars) from other countries every year.

The National Park Foundation is the official charity for the NPS and helps raise private funds to preserve these precious national landscapes along with the culture and history of many sites.

Their website has an array of fun and interesting activities and information. Check it out here – https://www.nationalparks.org/

You can learn more about the National Christmas Tree here.

From the staff at The Park and Facilities Catalog,

we wish all park employees, our customers

and everyone else a very Happy Holiday season.