Due to limited raw material supply and a very high demand, Lead times are only estimates and may fluctuate. 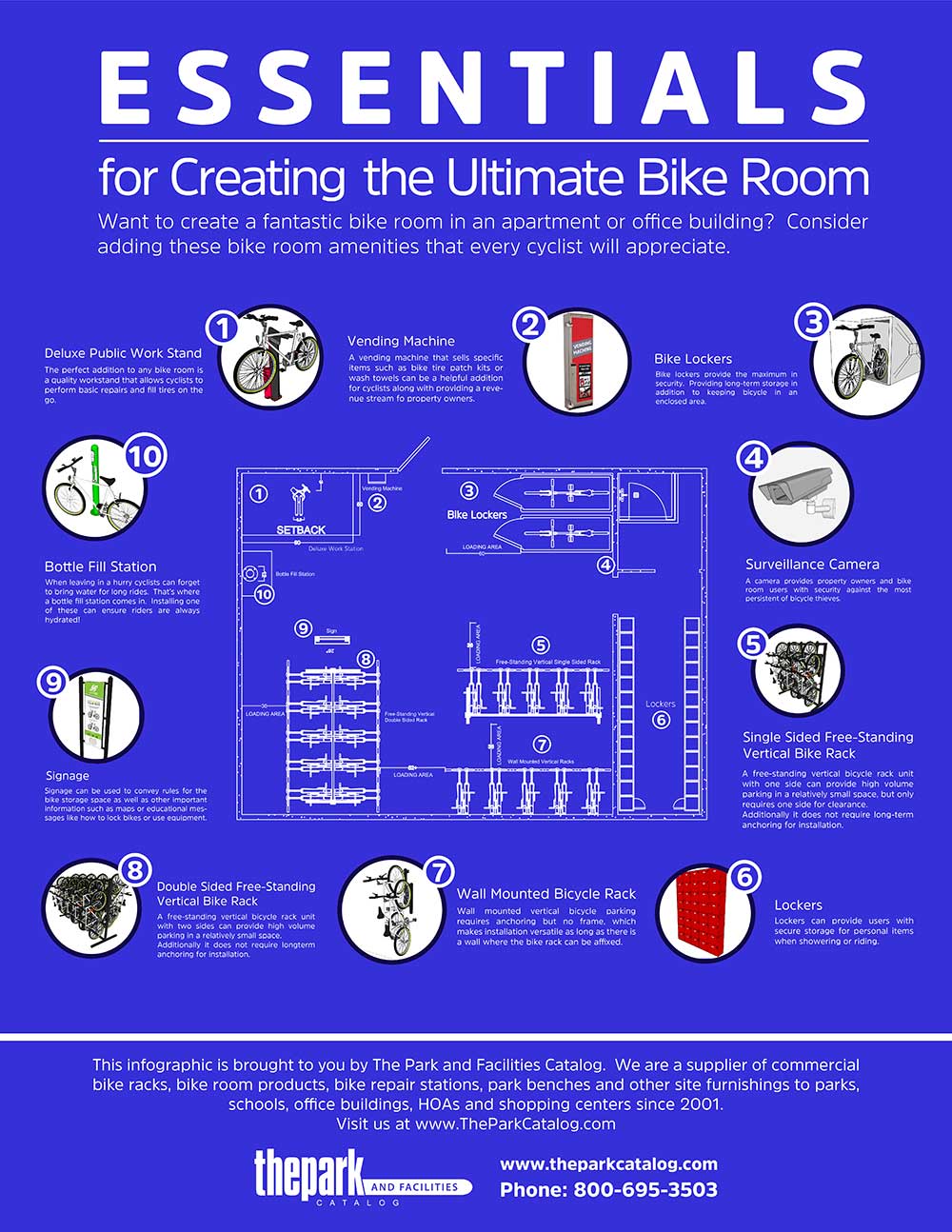 This infographic on Bike Room Amenities was brought to you by The Park and Facilities Catalog with a full selection of commercial bike racks, vertical bike racks that are ideal for bike rooms, bike lockers, and other amenities such as bike repair stations.

Note: The Park and Facilities Catalog is willing to provide free bike room layouts to help architects, planners and builders to maximize the number of bicycles in a limited space. Give us a call.

Many cities now require bike rooms in their zoning laws for new or renovated apartment buildings as a way to accommodate more bicycle commuters. This is a part of a nationwide movement as cities invest billions in improving their bicycle infrastructure by adding more protected bike lanes and making streets safer for bicyclists.

Builders can also market their bike rooms to attract renters and tenants as there are a record number of Americans who now own bicycles, estimated at 62 million. Bicycling is a favorite means of transportation for Millennials who prefer to leave their cars at home and bike to work or for recreation. In fact, the League of American Bicyclists says the number of bicycle commuters in bicycle-friendly communities has increased by 105% in the past several years.

For a bike room to be successful, it must provide adequate aisle space for bicyclists to walk and load their bikes. That is why wall-mount bike racks or free-standing bike racks are highly recommended. By standing the bicycles upright, more bikes can be stored in a room with limited space. It is also critical that people have easy access to a bike room, 24 hours a day. Because bicycles are more expensive today, it is also important that the bike parking racks provide three points of locking contact so the bike frame, front tire, and the bike rack can all be connected by a sturdy U-Lock or heavy chain.

The Park and Facilities Catalog is an advocate for bike lanes and safer streets for bicyclists. The company is designated as a Bicycle Friendly Business by the League of American Bicyclists.