Posted by: Robert Caston May 31, 2019 in Parks and Recreation 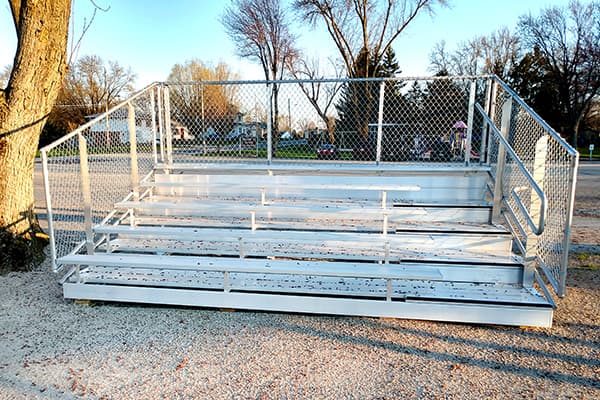 One of two sets of new aluminum bleachers at the Clyman Canners ballfield.

Is it time to upgrade your spectator seating with new, safe aluminum bleachers?

While many towns across the country host baseball leagues that have been at play for decades, it does not mean seating for your fans can last that long as well.

Take the folks who run the baseball organization Clyman Canners of the Rock River League.

By the way, this baseball league in the small town of Clyman, WI, has the very unique honor of being the Second Oldest Adult Amateur League in the country.

Amazingly, the league was established more than a century ago in 1910. That’s quite a distinction.

According to spokesman Kyle Krueger, the organizers recently realized it was time to add new aluminum bleachers to their facility.

They ordered two sets of 5-row aluminum bleachers from The Park and Facilities Catalog. One was 21 foot in length, the other 15 feet.

“Our previous bleachers were like 50 plus years old and they were not friendly to sit on, walk on, or maneuver around,” said Krueger. “In fact, one of the biggest factors in upgrading was the liability of the old ones, should someone get hurt.”

For that reason, Krueger said the league purchased The Park Catalog’s Midfield Series with railings and a designated stairway to avoid falls or injuries.

“The compliments that we have received already from them is great. We are very proud to add these to our park and the field that so many people have poured thousands of hours in to make it what it is,” he said.

Krueger has coached and visited sports facilities for more than 20 years and said, “The product (bleachers) I think is really good.”

Smartly, the league plans to add some banners to their bleachers. Why not? The seats attract people and are a great way for a business or sponsor to get recognition and brand exposure.

“I think it is really going to make these a focal point,” he added. 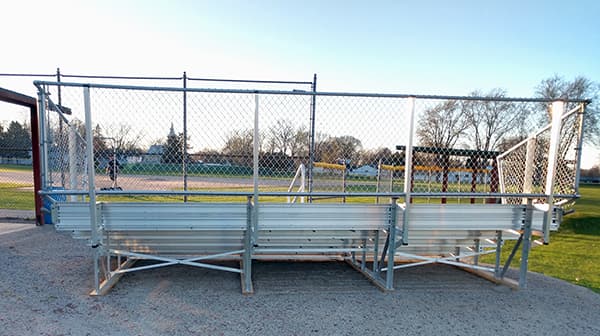 Rear view of the new bleachers for the Clyman Canners baseball field. The league plans to hang banners on the fencing.

More and more sports facilities around the country are upgrading their seating.

Advancements in bleacher manufacturing have made this spectator seating safe and more accommodating to everyone.

For example, leagues can now order bleachers with handicap wheelchair access. Those bleachers can include a ramp and seat cut-outs for wheelchairs.

Bleachers can also be ordered with fencing and handrails.

More and more people are becoming involved in local sports around the country. Baseball has seen a major resurgence due to promotions from Major League Baseball.

As more spectators visit these games, they are going to need adequate seating.

Call the aluminum bleacher experts at The Park and Facilities Catalog. We have supplied bleachers since 2001 to ballfields across the country, including schools, colleges and universities.

Our bleachers are made with top-grade materials and hardware in a state-of-the-art, 70,000 square foot facility in central Florida.

Bleachers are available in standard sizes, elevated bleachers, transportable, tip and roll and even custom bleachers.