Posted by: Robert Caston April 3, 2020 in Parks and Recreation 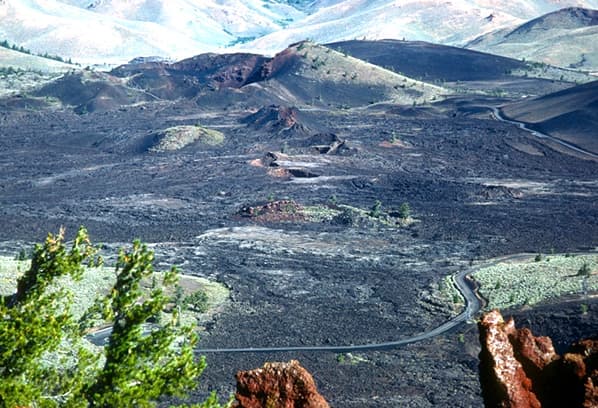 If you want to experience what it’s like to visit another planet without getting in a spaceship, consider these five national park areas with out-of-this-world landscapes.

Let’s start with one of the most obvious:

This enormous park, 400 square miles, located in Idaho definitely has a different planet-type appearance to it. Much of the landscape basically consists of undulating black mounds with really nothing else. That’s because those mounds were once made with molten lava. This area has some of the best rift cracks in the world (including the deepest on earth at 800 feet), varieties of basaltic lava, ancient tree molds and lava tubes. Within this desolate landscape, you can also see fissure vents, cones, and giant rock blocks. But in some spots, there are also wildflowers, shrubs, and trees. It’s truly one of the strangest places in the National Park System.

When you visit this national park, you might recognize some of the scenery from actual sci-fi movies. And you would be right. Luke Skywalker’s home from the first Star Wars movie was filmed in this park. Director George Lucas liked the stark, open landscape as a backdrop. (Another Star Wars movie was filmed at the Bonneville Salt Flats in Utah). If you go there, note that Death Valley, the lowest national park below sea level, is the hottest and driest place in North America. The highest known temperature was 134 degrees recorded in July 1913. Covering more than three million acres, it’s a place filled with salt-flats, sand dunes, valley and canyons, all surrounded by mountains that are snow-covered in the winter. January is the best time to visit. Definitely not July.

While Death Valley has a mix of flat landscapes surrounded by mountains, Bryce Canyon’s strange terrain consists mainly of mini-mountains peaks or spires. To add a sci-fi language spin, those reddish spires are called “hoodoos.” The park is 55 square miles located in Southern Utah, near one of the most popular parks in America – Zion National Park. The terrain is a hodgepodge of canyons, bowls, and amphitheaters. The strange formations certainly create a unique backdrop for any adventure. There are more “hoodoos” here than any other place on earth.

This park is located in northeastern Arizona and is famous for its petrified wood. (Which, unfortunately, if you try to take it with you, will result in a fine). The park is about 230 square miles and is a fossil hunters paradise. There are dunes, striated mounds, and desert and even petroglyphs from inhabitant longs ago. If you want to see Mother’s Nature’s artistic abilities at work, check out the Painted Desert. In addition to all the old fossilized pieces, there is also an array of flora and fauna. Plus, there are ruins left by Navaho and Apache Native-American tribes. Quite the diverse landscape from ancient times for sure.

While many of the places we mentioned above are dormant landscapes that hardly changed over the centuries, at this park there’s quite a bid of wild activity taking place 24/7. Want to shoot a movie with live volcanoes and molten lava? Here’s the place to do it. Located on the island of Hawaii, there are not one, but two active volcanoes – Kilauea and Mauna Loa. The 300,000-plus acre landscape is very diverse – there are steam vents, pit craters, cinder cones, spatter ramparts, fumaroles, thermal areas and black sand beaches. Surprisingly, there are also seven ecological zones where you will find a rain forest, woodland areas and plenty of plants and wildlife.

Check out these parks and other interesting national parks at www.nps.gov. There you will find FREE goodies such as maps, photos, videos, educational kits and things for kids to do.