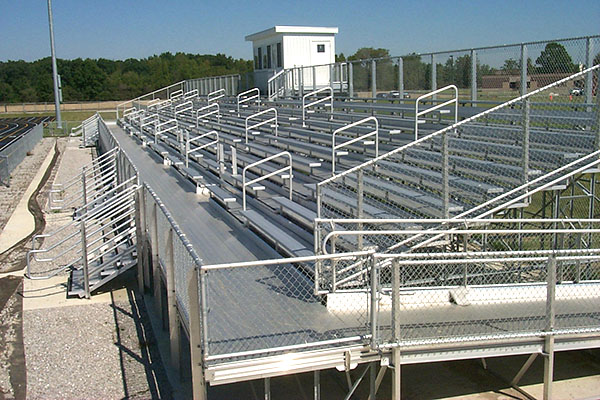 Experts recommend that schools and other facilities have a plan to replace older bleachers with new and safer aluminum bleachers early before they become condemned or unusable.

Managers may want to consider creating a plan to upgrade to new aluminum bleachers because condemned or otherwise unusable bleacher seating can have major implications for a school or facility. Those issues can go beyond just providing a place to sit for upcoming games.

That type of negative designation for your bleachers can reflect on the facility management as well. Patrons may question the commitment to their safety, and whether the rest of the facility or venue is being cared for and managed properly.

Planned events will be moved, or in a worst-case scenario, canceled altogether.

Parents will be angry. Ticket sales and concession revenues that were counted on are now gone. Teams that call the venue home are required to play their season’s home games, including annual homecoming games, at other venues. Logistical arrangements have to be made. Schedules reprinted. It goes on and on.

Community goodwill and trust can be lost at the time when it is needed most because emergency replacement bleachers will take patience, time, and money.

Yet this situation still happens, much too frequently. And once it happens, you are in for a recovery time that you may not be expecting.

Unsafe bleachers cause change in venues and cancellations

The Crossville Lions, of Crossville High School in Alabama had to cancel their much-anticipated fall jamboree with a rival school because their new, home field bleachers weren’t finished.

The older, concrete bleachers they used for years were condemned after visually noticeable problems required a more thorough, professional inspection.

The inspection results quickly led to the DeKalb Board of Education approving the bleacher replacement.

Also in question are their first two home games, causing the school to scramble to find alternative sites to use as a substitute home field. This situation has raised some disappointment within the team coaching staff.

Head coach Miles Holcomb acknowledges the obvious financial aspect of missing the ticket and concession sales, but added: “We’ve got 17 seniors that have put in a lot of work and they’re not going to get to play in their stadium until week six, which is disappointing”.

Similarly, Billingsley High School, in Alabama found out the repercussions of condemned bleachers when their high school football stadium and bleacher seating was declared unsafe after an inspection by a structural engineer.

That single decision meant that the high school would have no home field football games this year, much to the disappointment of the players, especially the seniors.

Superintendent Spence Agee said, “Once we were informed there was a problem, we had no choice. For the safety of everyone, it was decided that games couldn’t be played there”.

Luckily, the nearby communities and schools have helped out with logistical situations, but the timing of the news couldn’t have been worse, coming at the beginning of the season.

Obviously, the bleachers didn’t get in this bad of shape over one season, so could it have been avoided?

Some residents and regular fans of the high school football team say that the bleachers and stadium have been neglected for years, leading to this cancellation of the school’s entire season of home games.

With an aggressive timeline of replacement, Superintendent Agee hopes to have new aluminum bleachers in place for the first round of playoffs to provide their school with a chance of hosting at least one home game this year. It’s a plan that again, now hinges on everything working out on a tight timeline. 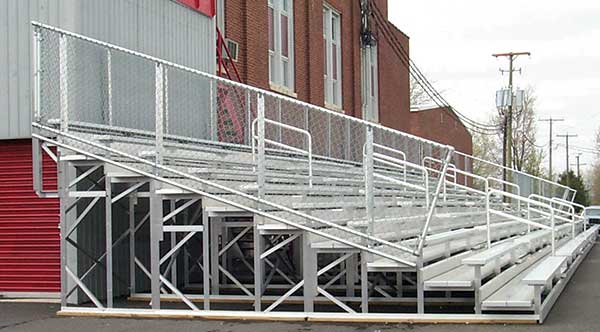 Give yourself plenty of time to plan for the replacement of bleachers to avoid delays from weather, etc.

Just ask Superintendent Nicole Kooiker, of Ottumwa High School, Ottumwa, Iowa. The Ottumwa Bulldogs will be able to play on their new field at Schafer Stadium this year, but the spectators may feel a little left out of the excitement.

Due to an unanticipated delay, the fans will be greeted with the comfort of watching the game from newly laid plywood as bleacher seats.

“The renovations didn’t make the timetable of the season opener,” Kooiker explained, “because the project required change orders, an emergency meeting, and scheduling acrobatics.”

Encouraged by the improvements so far, most everyone is pleased, except those fans that get to watch from the luxurious plywood bleacher seating. The improvements include the replacement of all stadium bleachers with aluminum bleachers, repair of the eastern stadium bank, and a reconfigured look for the pavilion and locker rooms, along with a new public restroom.

Glouster Stadium, in Athens Ohio decided to have their 80-year-old stadium inspected just weeks before the 2017 football season was scheduled to begin.

Unfortunately, the stadium seating was found to be unsafe and therefore closed off to the public.

With the team’s home games in jeopardy, the team is looking to bring in temporary aluminum bleachers to literally surround the field in a closer, tighter configuration. Trying to raise emergency money to do so, however, has not been easy. Had this stadium been adhering to proper inspection policies and requirements, an emergency situation could’ve potentially been avoided and repairs or replacement could have been budgeted for in advance.

Timing is a key issue when talking about the repair and/or replacement of bleacher seating for the public, and should be done with scheduling and calendar of events in mind, as the next example will show.

Like many other situations, it was an accident that precipitated the replacement of their old bleachers. They planned ahead and had the work done over the summer to make sure they were installed and ready to use for the upcoming school year.

The replacement cost was again an issue since it was considered an unexpected cost for a facility that is used by several teams in the area. This type of unplanned expense could have been budgeted for had annual inspections, updates, and preventative maintenance been performed as recommended.

While the first thing that comes to mind when old, poorly maintained bleachers are declared unsafe is the lack of seating space for your events, the declaration of “unsafe”, or “condemned” affects much more.

Cancelled events, movement of venues, loss of revenue, and disappointed fans are only the beginning.

Emergency replacement takes time, planning, and resources, things that aren’t generally available at the time that these decisions have to be made.

Expecting fans to sit on plywood, makeshift bleacher seating is not a solution that will have your patrons smiling.

Proper inspections and maintenance on a regular schedule will reveal potential problems and allow the proper time needed for repairs, updates, and eventual replacement, if necessary.