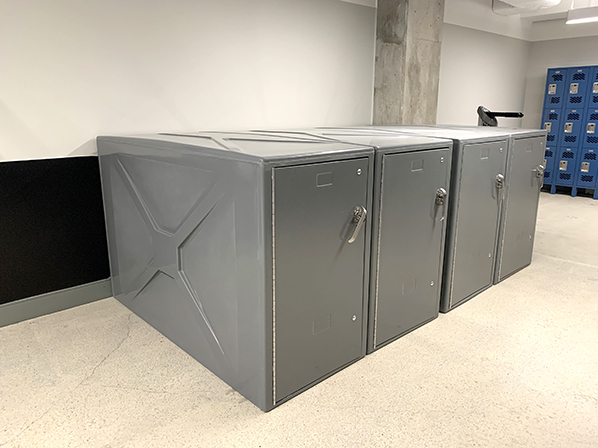 Bicycle lockers in downtown office building for growing number of workers who now bicycle to work.

For example, Layton Construction in Tennessee recently installed four bicycle lockers from The Park and Facilities Catalog in a bike room in a large office building in downtown Nashville.

Bike lockers offer complete security and even come with hooks to hang clothing or gear inside the box. The bicycle lockers offered by The Park and Facilities Catalog are manufactured with a molded fiberglass reinforced plastic composite.

That makes these lockers scratch-resistant and bicycle-friendly. They come with a standard pop-out T handle lock with keys recessed into the door or a handle that can be locked with a padlock.

If the bike lockers are installed outside, that fiberglass shell is weather and UV ray resistant.

For our 350 series choose from medium gray, white, café, teal, blue or green. For the 300 series, the choices are tan or medium gray.

This trend for office buildings to offer bike rooms and storage also coincides with the rising trend in bike commuters.

According to the League of American Bicyclists, the number of people who commuted by bicycle grew 62% from 2000 to 2014.

The bicycle advocacy group also reported there were 904,463 bike commuters and the city with the largest number of people who biked to work was Davis, CA, with 23%.

The Top 5 States ranked by total number of bike commuters and percentage of the population that bikes to work from 2005-2014:

Here are the Top 5 Cities for percent of bike commuters:

Here are the Top 7 States for growth in the number of Bike Commuters:

Office and apartment builders are now smart to add bicycle storage as an attractive amenity.

In New York City, the City Tower even promotes their bike room on the 19th floor with a view!

Chicago’s NEXT apartments offer a “bicycle kitchen” that includes a bike repair station, an air pump and vending machines with tire patch kits for cyclists.

The Brooklyn-Roosevelt building in NYC offers a “bike vault” along with its luxury rental apartments.

As you can imagine, driving in an urban environment is difficult. Parking is a pain\\\

That’s why many urban residents prefer the freedom of riding a bicycle around town.

But also in urban environments, the security of a bicycle is a major concern.

Experts say more than one million bicycles are stolen in the US every year.

Criminals have become much more sophisticated at cutting bike locks and stealing bicycles either to be resold, or hacked into parts.

For one they are locked. Some come with a version where the lock is embedded into the locker and can only be opened with a key.

Bicycles today can be expensive. That’s why tenants and employees like to see indoor and secure bicycle storage.

In addition, it doesn’t take much to create an appealing bike room.

Add some vertical bike racks, bike repair stations and bicycle lockers and a building now features an amenity that gets attention.

Especially with Millennials who are now holding off on driver’s licenses and instead opt for ride-share programs such as Uber or the pedal power of a bicycle.

According to Statista, there were about 47 million Americans who were considered cyclists.

You can be sure those bicyclists skew younger. The younger generations are more likely to work in urban environments and live in apartments.

Building owners would be smart to offer Bicycle Lockers and indoor bike rooms to this huge segment of the population.