Bike parking racks are more than just a place to lock a bike. They can have a substantial positive effect on saving cities a ton of money when it comes to overcrowded streets.

“The overall economic impact is greatest in the U.S. where the estimated cumulative cost of traffic congestion by 2030 will be $2.8 trillion.”

That’s the findings of INRIX, a traffic intelligence and movement analysis company, in conjunction with The Centre for Economics and Business Research (CEBR). In a recent study of traffic and congestion predictions, it was determined that the cost of traffic congestion will grow substantially, up to a 50% increase by the year 2030.

Staggering numbers to say the least, but additionally, on an individual basis, congestion-related costs are already up to an estimated $1,740 per person and are expected to jump 60% by 2030. Much of this cost has to do with time wasted in traffic, during commutes and traffic jams, and finding that elusive parking space.

Getting a grasp on the situation and embracing an economical, sustainable solution is a genuine concern. As we look to relieving our traffic congestion problems, the solution may be right in front of us, or at least, at our feet.

While cities are so focused on building new highways and roads, statistics show that cycling is continually gaining popularity.

Studies performed in 2015 show that over 100 million people over the age of three rode a bike at least once in 2014.

Cycling is currently the 7th most popular recreational activity, but it’s those that are now using it as a way to commute that are pushing the cycling industry to grow.

In a 12-year span, cycling as a way to commute grew 62% on a national average, but in communities considered “bicycle friendly”, that figure rose by 105%.

Why Cycling and Commuting Make Sense

Focusing On Needs of Cyclists Is Key

As a community, being bike friendly is the key, and that includes what these riders can do with their bicycles once they reach their preferred destination. 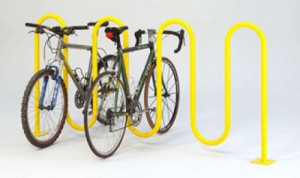 Some states have been at the forefront of this movement and took the initiative to focus on specific needs of cyclists long ago.

Seeing the need, and realizing that cars take up valuable space, the Portland area started installing bike corrals, meaning a grouping of bicycle parking racks located in their own space, in 2004.

By 2010, because of requests from local businesses, they had more than 40 corrals located in every quadrant of the city. That number has more than doubled in recent years due to additional requests.

Bike corrals take the same area as two regular size parking spaces and are installed at grade level, using a series of bicycle parking racks lined up next to each other.

They can also be installed in “dead space” areas, like no parking zones, or those strips of real estate between the sidewalk and street that aren’t currently being used.

Accommodating up to 24 bicycles at any given time, it is easy to see the possible reduction in the need for potential parking places given the presumption that some of those drivers would transfer to cycling.

Other Benefits of Bike Corrals and Bike Parking Racks 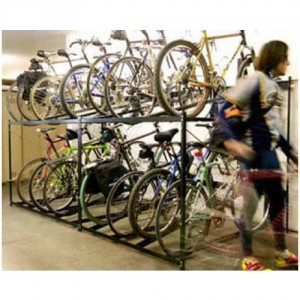 The Portland study suggested that cyclists typically found it difficult to find proper bike parking racks near their businesses. By installing end-of-trip, or destination facilities for cyclists, you are creating the conditions needed for riders to frequent your area.

Cyclists know that you are promoting a cyclist friendly environment, and see it as a comfortable and welcoming destination. You’re giving them a logical reason to come to your street, where they will tend to stay. How’s that for return?

Additionally, commercial bike racks can be easily customized to fit your business, your industry, or your logo. Along with terrific brand marketing, you are announcing that you are pro-cyclist, and, in fact, welcoming them to your business with an always-available place to park their bike.

With all these benefits to your business, you are also helping relieve the traffic and parking congestion problems by taking motorists out of their cars and allowing them to get on their bikes.

If you factor in our need for pollution control and society’s need for increased activity due to sedentary jobs or lifestyles, adding those decorative, architecturally inspired bike parking racks or a community bike corral on your little corner of the world makes good sense personally, for your business, and for your community.