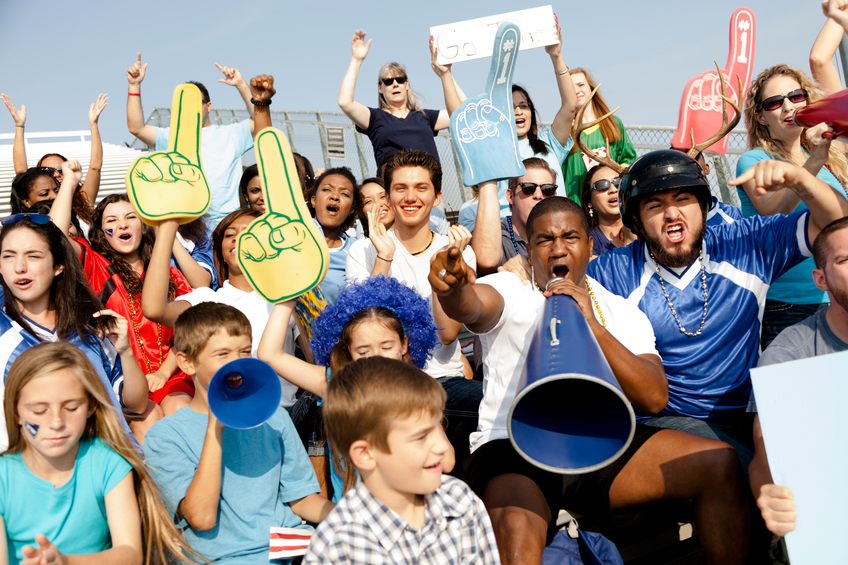 Friday nights is when hometown fans hit the aluminum bleachers.

The conversation generally picks up in earnest about midweek before anybody is seated on aluminum bleachers in the stadium. But the more excitable fans will be talking all week.

You’ll hear it at work, in the line at the grocery store, while pumping gas at the nearby convenience store, and anywhere else there happens to be a couple of people within close proximity to each other.

Heck, some people are more than happy having this sort of conversation with themselves, getting themselves worked up for weekend matchup.

“Big game this weekend, Joe. Everybody is goin’. You goin’? We gotta get ‘em back for last year. Remember that game? They beat us pretty good if I remember right. We didn’t play our best game though, and they had that kid who was a star recruit. I remember that. How are they doing this year? Any good? We gotta get a little revenge on those old crosstown bullies, hehe.” 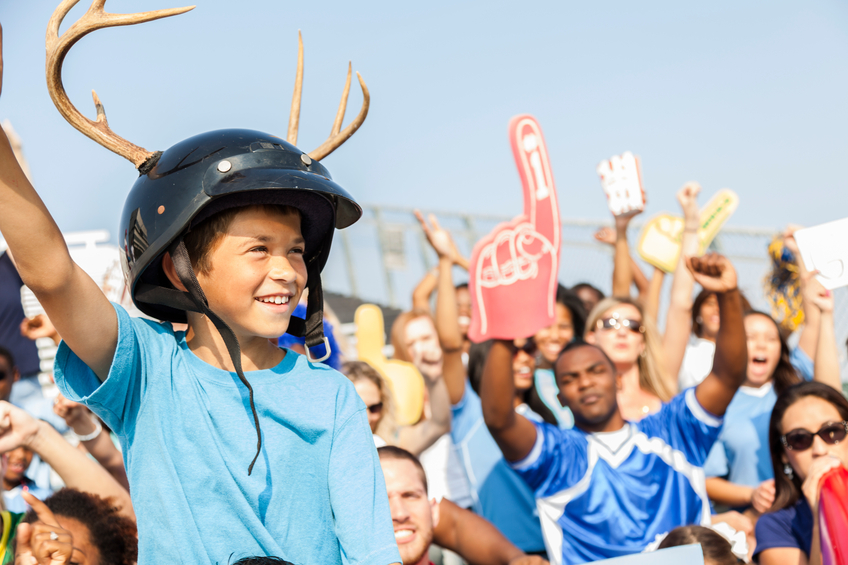 Fans in bleachers with their crazy outfits and signs

It’s always us and we, isn’t it? That should tell you everything you need to know about local, community, Friday night football.

Not that Joe, Bob, Maggie, or any other of the local residents wouldn’t strap on the pads and helmet and go after the crosstown rivals if they could. But at this stage of their lives, they’re simply a few of the hundreds or thousands that will gather in the aluminum bleachers and play the Friday night football game vicariously through the team.

They will be there in spirit and presence, and undoubtedly feel the joy of victory and the pain of the losses just as if they were out on that field in front of all the crazy fans yelling from the bleachers.

By Friday afternoon, the town has reached fever pitch. Out in the streets, to the novice viewer, it appears to be the beginning of some sort of parade.

And, in it’s own way I suppose it is. But instead of floats and community leaders waving to spectators lining the streets, there’s a long caravan of cars, buses, and minivans, full of students, parents, and anyone else that wants to join in, and brother, let me tell you, that can be a lot of people.

Car flags, banners, and messages on the windows are the decorations for this group, because they’re hitting the road, horns blowing. This week is an away game, so the community travels just as the players will.

Even if it means early dismissals, early business closings, and an hour or two to the game venue, Friday night football brings the community together in a way that no other event can.  The Friday night game always has the community buzzing with anticipation.

There’s no shortage of strategizing and predictions of what will happen. In households and locker rooms, there have been marks on the calendar, anticipated tailgate menus, planned bleacher parties, and lists of items to be packed for the road trip.

There have been sick days taken and vacation days scheduled so that everyone can take part in the caravan to the game destination. Yep, it’s Friday Night Lights football, and for the next few hours anyway, nothing else matters.

(This is such a big part of Americana, that NBC aired a TV show called “Friday Night Lights” for two seasons (five if you count seasons on DirecTV)  and earned several Emmy nominations. There was also a movie with the same title that starred Billy Bob Thornton. That movie is ranked 37th on Entertainment Weekly’s list of best movies about high school.)

When you’re in the bleachers you’re among friends

You make your way up to your favorite spot in the bleachers, the area that will be home to you, your friends and family for the next three hours. It’s the place for friendship, cheering, yelling, laughing and sharing emotions with people that are all here for the same reason.

Those shiny, eye-catching, aluminum bleachers are your invitation to participate in this weekly event, and are an integral component of these games.

The players need the bleacher fans, and the fans are there to support the players representing their community, town, and alma mater.

Some of those fans may be reminiscing about their own school days, and the football rivalry back then compared to now.

Others may have been former players, and now get the chance to relive their own glory days by attending these games and telling anyone who will listen about how times were when they played.

Still others just grew up watching local football, and are there purely as fans, enjoying the sport as it is meant to be played, for fun, competitiveness, and love of the game.

This is the place to be. It’s a natural gathering place, complete with nachos, popcorn, pretzels and hot chocolate. It’s the place to see your friends, family, and maybe relatives on a weekly basis, spending time and catching up on the happenings of the previous week. Crowded bleacher seating reflects a great, involved crowd with mutual interests.

One thing is for sure. These Friday night football fans are passionate and caring, but also rowdy and unforgiving. They will stomp, cheer, make noise, and do anything and everything possible to help their team to victory, all while in your aluminum bleachers.

The good news is that aluminum bleachers are economical, easy to maintain, easy to obtain parts for, and easy to use and keep clean. They are weatherproof and resistant to corrosion and damage.

Unfortunately, once installed, many bleachers are neglected, becoming an afterthought as far as scheduled maintenance and inspections. Are your bleachers up to the challenge of the Friday Night Lights football crowd?

Your school is rich in tradition and can claim to house one of the most popular football teams along with undoubtedly the best fans. They show up, rain or shine, hot or cold, and win or lose, to support their home team.

In turn, you need to provide the best possible aluminum bleachers to accommodate them, making sure your bleachers are safe, secure, comfortable, and remain the place that the whole community wants to be on game nights.

There are steps you can take to assess your bleachers and help to keep them in championship form for the fans.

Your field is the backdrop for the huge game, bringing the whole town or community together for a common cause, uniting those that otherwise may not have gotten a chance to meet and get to know each other. This happens in every town across America, just like it took place in the fictional Dillon, TX, for the TV show.

The aluminum bleachers around the field are the unifying structure for these fans. Bleachers bring together the young and old, the quiet spectator and the rowdy super-fan, the proud parents and the spirit-filled students.

It’s a no-brainer to perform routine inspections and maintenance on the bleachers.

But you should also consider updating your aluminum bleachers when needed, giving the best fans the best seats in the house, tonight, next week, and hopefully, into the playoffs.