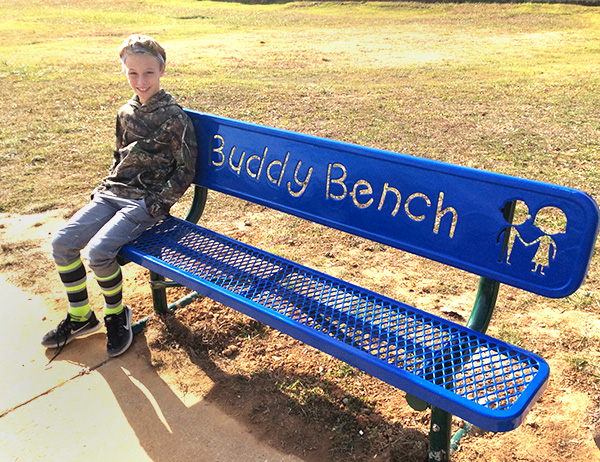 A student on the “Buddy Bench” he was able to get installed at his elementary school to foster making friends.

Sometimes just one child can make a big difference in the lives of their classmates.

According to his mother, Dottie, during recess Alex would often see children on the playground with no one to play with and this really bothered him. During the end of year party at church camp, Alex noticed a bunch of children were playing. But a young man in a wheelchair, was sitting all by himself. This was very upsetting to Alex.

He went over and befriended the youngster and together the two of them had a great time together.

The idea struck Alex that many other children also experience the same kind of loneliness.

To change this, during his summer break Alex got the idea of adding a “buddy bench” to his school. Alex was a rising student at the time and wanted the bench in place so when children came to school on the first day, they would see a new place for them to meet new friends while they were on the playground.

“We didn’t know these were real things,” said Dottie.

But his family gave Alex their support, and he approached school administrators with his plan.

They liked the concept.

But they said the family had to purchase the bench on their own and insisted that the bench come from The Park and Facilities Catalog because the school had ordered site furnishings from the company before. “They said we had to go there because of the quality of the products you had,” she noted.

Dottie called the Park and Facilities Catalog with her idea and Carrie Georgopoulos, Senior Relationship Manager for the Park Catalog, asked management to assist with the project.

The bench was soon installed at the school playground.

Buddy bench encourages students to mingle with others

In a video prepared by a teacher at the school, Alex said he thought of the bench because “I saw some kids and me and they didn’t have anything to do a lot of time.”

Well, the bench changed all that. 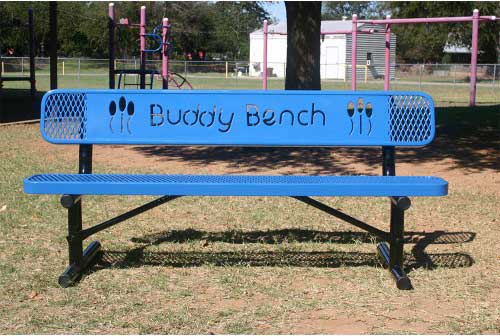 Buddy benches with a thermoplastic coating are easy to maintain and resistant to UV rays and bad weather.

The idea behind a “buddy bench” is that when children are outside running around on a playground, if one of them is alone, they can go sit on the bench. By sitting on the bench, let others know they are looking for a friend or someone to play with.

One strategy that is important for teachers is to inform students about the purpose of the bench and to encourage them to participate. Whether the child is looking for a friend or if a bunch of children notice a student sitting by themselves. The students are asked to walk over and interact with the youngster.

Dottie said this is especially important in the Stafford area, where many of the families have parents who are involved in the military. That means those families, and their children are constantly transitioning. That can be tough on a youngster who continually needs to make new friends.

“We had to make sure we got buy-in from the school (on how to promote the bench),” Dottie said. “The teachers later told us, ‘This works for us.'”

Children started checking the bench out. Alex said children in other grades also started using it. He said that was important because it then inspired younger students to become involved as well.

“That means it’s working,” he said.

Teachers and students took the concept even further.

If a student felt they were being bullied on the playground, a major issue in schools these days, the youngsters were also encouraged to sit on the bench as a sort of place of refuge. A place where they would get support from their fellow students.

Ironically, Dottie said that after a while, the “buddy bench” became a favorite place to hang out.

“All the kids wanted to sit on the buddy bench for an opportunity to meet new people and make new friends,” she said. “They wanted to be a part of something wonderful.”

For his efforts to help foster comradery and friendship at the school, Alex was given an award by the school principal.

“What a great way to show school pride and be a role model,” said one teacher.

“I hope the buddy bench will help people get more friends and not be sad when they are at recess,” Alex added.

Family creates charity to install benches at other schools

The entire endeavor inspired Dottie’s entire family to seek out other projects.

She formed a 501c non-profit organization called Brighter Tomorrows and set up a website – www.4rchildren.org.

The charity is now working to get involved in several projects, including helping schools and communities add buddy benches of their own.

One project Brighter Tomorrows is participating in is to help athletes like Michael Davis and his running partner Ashton McCormick to participate in running races such as marathons.

What’s even more impressive is that according to the website, Michael is legally blind and Ashton is autistic.

“Together they are a true example of how to appreciate the gifts you are given,” said a note on the website.

Other projects include generating donations for school meals, supplies, sports equipment, and fees.

“Here at Brighter Tomorrows, we are driven by a single goal: to do our part in making the world a better place for our children. We believe no child should miss out on the opportunity to excel in school, sports or their community due to a situation outside of their control.”

“We’ve had an amazing reaction from the community,” Dottie said. “People are very engaged.”

As for the buddy bench, The Park and Facilities Catalog is proud to have participated in adding this important school site furnishing to the campus.

“We’re seeing more and more interest in these buddy benches because they have such a positive impact on how children socialize at school,” said Carrie. “They are very effective. I would think every school and playground would look into implementing a program like this.”

Dottie added, “Your company really helped to make history at that school.”

We’re glad to do it.

But all the credit really goes to one young man named Alex, who not only saw a need for his fellow students but also took the initiative to find a way to fix the problem. We certainly need more young people like him.

You can support the charity’s efforts through donations at www.4rchildren.org and https://smile.amazon.com  – select Brighter Tomorrows LLC in Stafford, VA.