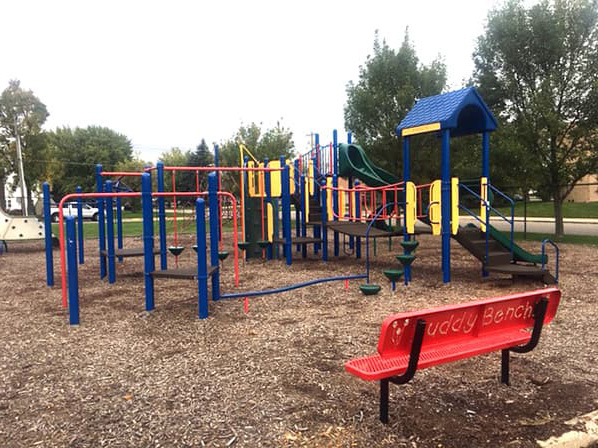 Buddy Bench at St. Mary’s Catholic School, donated by the Ganje family in honor of their parents.

It is estimated that more than half of elementary schools in the US now feature Buddy Benches in their playgrounds.

The Park and Facilities Catalog, a major supplier of Buddy Benches nationwide, continues to see a steady number of orders for this popular product.

And many of the orders we see come in the form of donations either by individuals or organizations who recognize the power of this simple concept.

The school recently added a Buddy Bench that was donated by the Ganje family, in honor of their parents Dice and Bennie.

School principal Troy Sladek said the couple was very active supporters of the school. They served on the Parish Council, Diocesan Board of Education, various school committees, CCD programs and even volunteered in the lunchroom.

“Their children have proud memories of their parents’ desire to make sure everyone felt welcomed and no one was ever left out,” he wrote. “The buddy bench provided by the family to the school in honor of their parents epitomizes their love and kindness.”

The idea behind Buddy Benches or “Friendship Benches” is to provide a safe place where a student can go if they feel lonely or left out.

Troy said the school knew about the power of Buddy Benches and initially attempted to implement the concept using a plain bench.

However, Troy said when they added the Buddy Bench from the Ganje family, with the large letters designating the name, students became more involved.

“Having the bench say “Buddy Bench” is a game-changer because kids can identify with it easily. I made it match our playground but picked a different color so it would stick out,” the principal said.

One of the major keys to the success of the program is for the teachers to inform and remind students about the idea behind the bench.

“We talk to the kids about the concept that no one is to play alone on our playground. If you don’t have someone to play with, they are to sit on the bench,” Troy said. “If students see a classmate on the bench, we ask that they go sit to visit and ask them to play.”

St. Mary’s Church has a long history in Alexandria. The church was built in 1882 and the school currently stands at that location. The school was opened in 1957 and consisted of 12 classrooms. Today the church has grown to more than about 5,000 parishioners. There are 850 youngsters enrolled in religious education programs and on average 200 enrolled at the school. 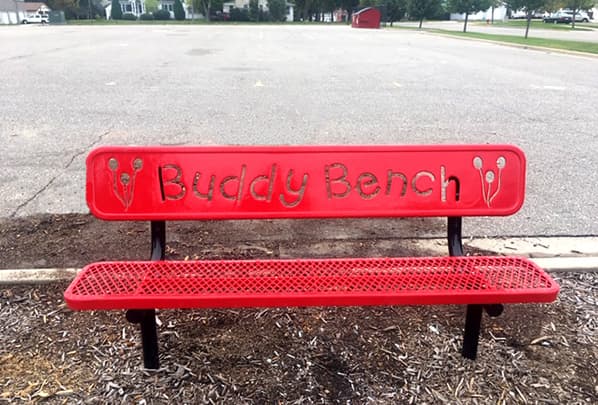 The Park and Facilities Catalog is one of the leading suppliers of Buddy Benches to schools nationwide.

Buddy benches made specifically for schools

The metal benches supplied by The Park and Facilities Catalog are built tough, for use by children.

First, the metal is covered with a thick, polyethylene copolymer-based thermoplastic coating. That coating is applied in a sort of fluidized bed that seeps into spaces and covers all edges of the metal. Therefore, the surface is smooth to the touch.

Secondly, that thermoplastic coating is tough. The coating protects the metal from rust and corrosion. It is also impact resistant and UV stable to prevent fading.

When it comes to school kids, as you know, a bench can take a beating. But with this bench, spills won’t stain the finish. In fact, the bench is perforated so liquids can’t pool up. The expanded metal surfaces also allow for air to flow through and keep the seat cool in warmer months.

The frame is covered with a powder-coated application that is oven cured and basically baked into the metal. That also prevents rust or corrosion.

All the parts are professionally welded according to top-grade MIG standards. The parts are held together with stainless steel hardware.

Troy added, “The bench is very nice. It is of high quality.”

“It’s exciting to see St. Mary’s Catholic School embrace the Buddy Bench concept,” said Jessica Kyriakos, Vice President and General Manager. “And we applaud the Ganje family for donating this bench to help children socialize and make friends. We imagine some of those friendships formed at the bench may last for decades.”