Posted by: Christopher George August 1, 2013 in Adventure, Parks and Recreation 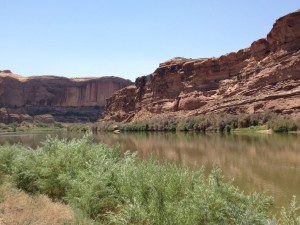 There are few experiences that awaken the soul like visiting the western mountain states.  Everything there is on such a grand and wondrous scale.  I have by no means seen every National Park in America, but I’m glad I can say I was able to cross two off my list this year with my summer excursion to Moab, UT.

One doesn’t need any reason at all to make the trip to Moab other than a love of the natural world and adventure.  I was extra lucky this year because my oldest daughter Emma (18) graduated high school this June and declared her desire to go on a trip with me.  Just the two of us.  Somewhere out west. “You know Dad, a character building trip.”  It took a fraction of a second for me to respond in the affirmative.  The only question was where?  Yellowstone? Grand Canyon? Lake Powell? Yosemite?  I thought to myself scrolling through the mental rolodex of our notable customers.  Any of those would be an awesome trip and a good chance to visit important customers of The Park Catalog and photograph some of our recent product installations.  But then I checked myself.  Kate and Baby Henry (6 months) are at grandma’s house in Ohio, and my other daughters Lizzy (15) and Caroline (13)  are away at camp.  I may never get this chance again, at least not while I’m young!  So I took the advice of my childhood friend Andy who said Moab is a must.  Arches and Canyonlands are both right there and so is Dead Horse Point State Park.

Now we had seen pictures, but we were not entirely prepared.  First off about 24 hours after booking this last minute excursion the news headline of “Record Heat Wave Engulfs the Western United States” caught my eye.  It’s going to be 130 degrees in Death Valley, ouch!  And 120 in Vegas, yikes.  Maybe I better check Moab’s forecast.  OK so it’s going to be 108 degrees in Moab. I’ll be fine as long as I don’t drop dead!

Now the plan was to pack as much activity into a week as possible without getting heat stroke.  Outback horse riding, rafting the Colorado, hiking in Arches, Canyonlands and Dead Horse Point, an off road sunset excursion, a jet boat tour and possibly some mountain biking. 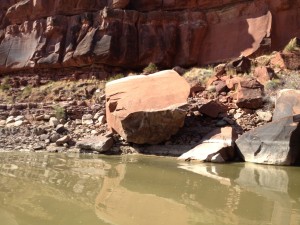 So Emma and I were filled with anticipation as we made the turn left turn onto SR 128 “river road” to take us to the Red Cliffs Lodge along the banks of the Colorado river in an area known as Castle Valley.  Very quickly we seemed in another world.  Deep in a canyon with the cliffs on one side a tan sandstone like surface with black streaking and large patches and the others side brittle red cliffs that evoked an idea of what I thought Mars might be like.  The massive rocks that had so clearly broken away from the cliffs over millions of years all gave us the faint idea that if we were lucky (or unlucky) we just might see a chunk break off and slide down the mountain.  Wow! I had to pull over several times to take photos, even knowing I would be back and forth on that road at least a dozen times and that this probably wasn’t even the “good” stuff yet.

I was a bit puzzled by the black streaking and blotching on the left side of the canyon.  In a city if you saw that on concrete or limestone building you would think “air pollution”, but in Moab?  Not likely.  On our second day we met some rafting companions Tanya and Stirling from Destin Florida, and 15 year old Stirling enlightened us about the oxidation of manganese iron in the rocks that created the black appearance.  I posited that the green sections I had seen in the mountains must have been from oxidized copper.  I’m so smart, aren’t I?  WRONG.  That is actually a massive layer of volcanic ash from about 150 million years ago, during the Jurassic period.  It is known as the Morrison Formation.  Of course, named after the Lizard King, Jim Morrison, right?  NO.  It named after Morrison Colorado where it was first observed.  It is chock full of dinosaur fossils.  Emma and I were getting a crash course in Geology from a 15 year old that arrived the same day we did and we loved it. 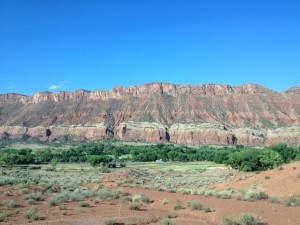 Yes Moab is a desert, but within this landscape there is a diverse and seemingly unlikely variety of geological phenomenon such as petrified sand dunes, and the Paradox Basin massive underground salt deposits, you know from when there used to be an ocean in Utah.  It’s hard to conceive of, but it certainly explains the Great Salt Lake and the Bonneville Salt Flats.

We had not really expected this to be an educational trip in the classical sense of the word, but we George’s are a curious bunch, and in Moab there is something fascinating at almost every turn.

I did a little reading up on Moab before we arrived and saw that there was a motion picture museum in town because many of the great old westerns were filmed there.  John Wayne had stayed at Red Cliffs back in the day and drove cattle every summer with the proprietor of the inn.  As we rafted down the Colorado our raft guide Stephanie pointed out all the landmarks from Moab’s storied cinematic past and present.  We passed the mesa Tom Cruise ascended at the beginning of Mission Impossible 2, then we came upon the mesa (or was it a butte) where Bon Jovi filmed the video for Blaze of Glory which he wrote for the movie Young Guns 2. Local folk lore has it that Bon Jovi wanted to set his instruments and equipment on fire at the end of the video atop the butte and inquired with the BLM.  When they said they would levy a stiff fine if he did it he asked how much.  The BLM responded $500,000.00, so Bon Jovi whipped out his check book and paid the $500,000 before filming.

To be continued. In the second installment: Chris and Emma spot Yogi and Boo Boo. 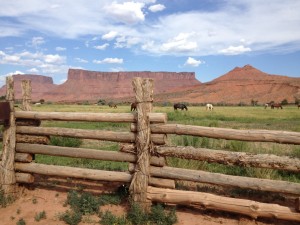