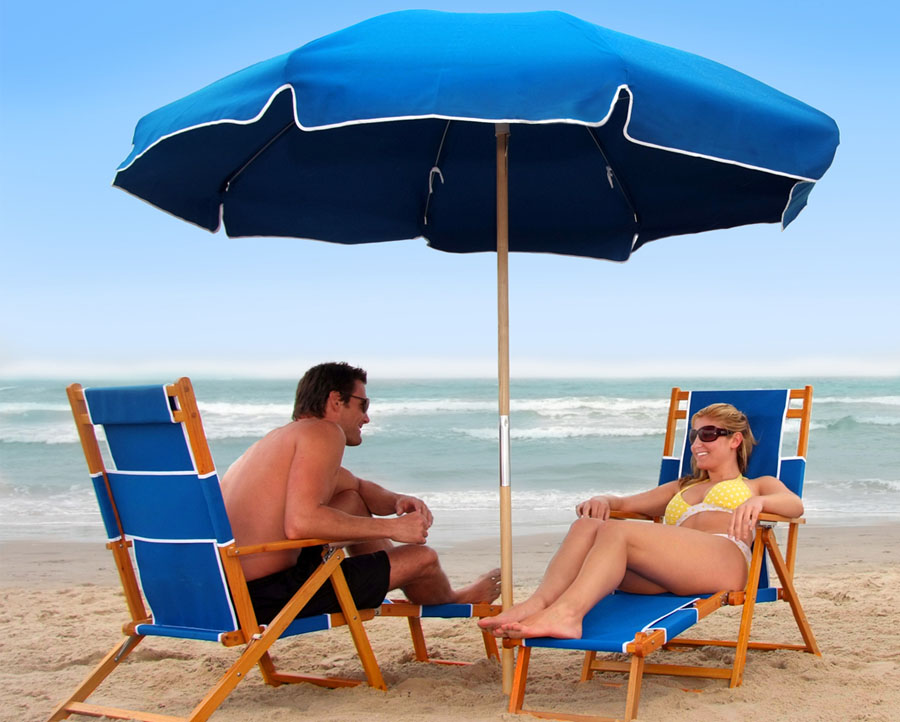 Commercial beach umbrellas are a key part of the guest experience

In the old days in China, the wealth of a person was measured by how many people carried their umbrella. Some umbrellas reportedly required the muscle power of 24 people. That’s rich. When it comes to a resort or park treating their guests like royalty, you also want to make sure you use high-quality commercial beach umbrellas.

The reasons? Liability, safety and durability. Numerous lawsuits have been filed by people who have been injured by flying umbrellas. In New York State, a woman was awarded $200,000 after a beach umbrella hit her in the head and she suffered a gash that required 13 stitches and was left with permanent nerve damage.

In 2010, two people were hurt in Naples, Fla., when they were hit by an improperly secured table umbrella during high winds. One woman was hit on the head and was left with a permanent injury with a herniated disc in her neck.

In Miami Beach, a beach umbrella from a vendor took off in the wind and stabbed a woman in the back. A similar injury took place in Ocean City, MD.

WIRED magazine reported that so many umbrellas fall apart each year that a person could literally build 25 Eiffel Towers with the discarded pieces.

Parts of a commercial beach umbrella

You would think an umbrella would be a simple device. They are and they aren’t. The basic components include a pole, fabric, ferrule top, open cap, ribs, joints, rivets, end tips, runner, stretcher, center ball spring and pointed tip. Make sure this hardware is commercial grade quality. One strong gust pounding one weak piece can bring the whole thing down. On top of someone’s head.

There are different mechanisms used to open large commercial beach umbrellas and other commercial umbrellas such as picnic table umbrellas. Those devices can either be crank lift, pulley lift or manual push up lift. There is even a motorized remote lift device that certainly makes life easier.

Another key component of a superior commercial grade umbrella is the fabric that is used. Think about it, unlike family or residential umbrellas, commercial umbrellas are used much more frequently. They literally need to withstand a full season of being out in the blistering sun, pounding rain and wicked wind just about every day of the week.

This causes a lot of stress on the fabric. That is why you want to choose sturdy, heavy-gauge vinyl or marine-grade fabric, which is reportedly the sturdiest fabric around. When you consider what a boat has to endure when it comes to harsh weather and salt water, you can see why marine grade material for a commercial beach umbrella is something to consider. 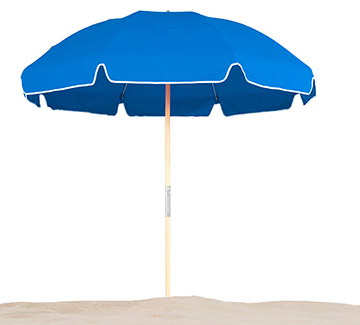 Commercial beach umbrellas made with 9 oz. marine-grade fabric that resist UV rays, are easy to clean and mold resistant.

Finally, there is the base. With commercial beach umbrellas, you can stick the pointed end of the pole into the ground. But to truly secure a top-grade, commercial outdoor umbrella, especially with picnic table umbrellas, use a heavy base. Bases come in several varieties. There are cast iron bases, bases made with concrete and lighter bases made with aluminum that can be filled with sand or gravel to secure them.

The main focus should be on making sure the commercial umbrellas are sturdy enough to withstand a windstorm, the fabric is dense enough to repel rain and block harmful rays of the sun and the base is secure enough to keep the umbrellas from becoming a harmful missile.

While an umbrella is a simple device, it is one of those devices that have withstood the test of time. Not many items that were in use nearly four thousand years ago are still in use today. A umbrella is one of them.

The word “umbrella” originated in Latin from the word “umbra” meaning shade or shadow (so shade was one of the first solutions this invention tackled, not rain as most would think).

You can see references to umbrellas in artifacts in China, Greece and Egypt.

Umbrellas were very popular with the Chinese for two thousand years and reportedly it was back during the Cao Wei dynasty that the folding umbrella was first invented. Those umbrellas were made with silk and then paper. They were treated with wax or lacquer to keep the water out.

Keeping that long tradition, by most accounts, China is the umbrella capital of the world. In just one city, Shangyu, there are reportedly more than one thousand umbrella manufacturers.

The ubiquitous umbrella has been recorded in art and literature for decades. What was one of the first things that Robinson Crusoe did when he was stranded on that deserted island ringed with beautiful beaches? He made an umbrella.

As you can see, at the end of the day, a simple umbrella is a vital part of the outdoor landscape. For resort owners or site managers, the quality of an umbrella will play a critical part in the success of your guests’ or visitors’ experience on your property. Make sure you choose sturdy commercial beach umbrellas or commercial grade picnic table umbrellas made with the right materials.

Note: New advancements in fabric technology makes these umbrellas tougher than ever for outdoor environments. Call the Park and Facilities Catalog today to see how you can add durable commercial umbrellas that can weather the elements.

To read more about the history of umbrellas and their use by royalty and religious leaders, visit this page.

Note: If you are in a rush, give us a call. We can quick ship certain models of commercial beach umbrellas and get them to you with faster lead times.