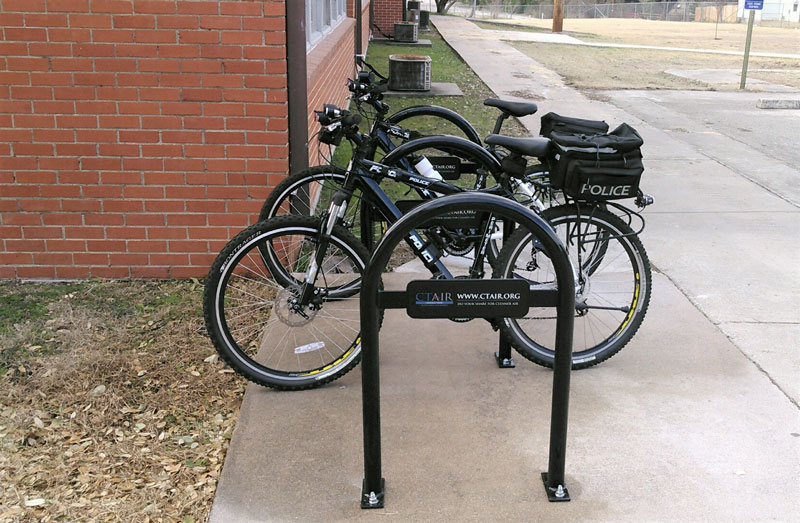 Sometimes a bike parking rack is more than a place to lock a bicycle.

In the case of the Central Texas Council of Governments, it’s one more step toward creating cleaner air in a seven-county area.

With a grant from the Texas Commission on Environmental Quality, the CTCOG recently purchased 60 custom bike racks from The Park and Facilities Catalog. These U-shaped, unique bike racks include a custom decal with the organization’s air quality logo and an inspirational message: “Do your share for cleaner air.”

A website, www.ctair.org is also listed to provide residents with additional information on air quality and how the public can get involved to make it cleaner.

This is more than just your standard bicycle parking rack – it’s also a mini-billboard for a great cause. 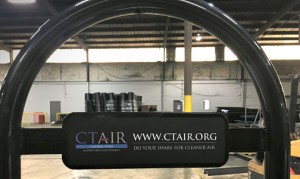 According to Jennifer Lawyer, CTCOG Environmental Planner, the purchase of the bike parking racks is part of an initiative from the Texas Commission on Environmental Quality to tackle the challenge of finding ways to cut back on sources of air pollution. And one of the major sources is the automobile.

“We wanted to encourage people to ride their bikes as much as possible instead of getting into a car,” she said.

One way environmentalists can actually measure the progress of sustainability efforts is by measuring the amount of ozone in specific regions.

Ozone as you might remember is a gas that protects humans from the sun’s strong ultraviolet rays. However, scientists want ozone to mainly appear in the upper atmosphere where it has a beneficial effect. Too much of the gas at ground level actually has a negative effect.

When levels of ozone are too high, it can cause breathing and other problems. The gas is also very destructive to plants, crops and forests.

In 2015, the Environmental Protection Agency set the mark for acceptable ground-level ozone at 70 parts per billion. This is to protect children, the elderly, those with lung disease such as asthma and people who work outdoors. Communities are determined to either have “attainment” of acceptable levels or “non-attainment” meaning their ozone levels are too high.

According to data collected at two EPA monitoring stations, the levels in the CTCOG area hovered very close to “non-attainment” status. The level in Killeen was at 67 ppb in 2015, down from a high of 75 ppb in 2011. However, at the monitoring site in Temple Georgia, the 2015 rate was 72 ppb, up from 67 the year before. The CTCOG is working hard to drive those numbers down by persuading people to drive less and bicycle more, and implement a number of other simple strategies.

To combat increases in ground level ozone, the CTCOG has posted several of those strategies that local residents can incorporate into their lifestyles:

• Refuel cars in the evening when it is cooler, don’t top off the gas tank, keep tires inflated and the engine tuned

• Try to reduce trips in cars and carpool when possible

As everybody knows, to promote more usage of bicycles, people need secure places where they can park their bikes at stores, schools and other facilities.

After conducting some initial research and talking to bicycle riders and a bicycle/pedestrian advisory committee, Jennifer said it was apparent that to foster the use of bicycles, one component that had to be addressed was making sure there were plenty of places to park those bicycles.

“They definitely felt there was a need,” she said. 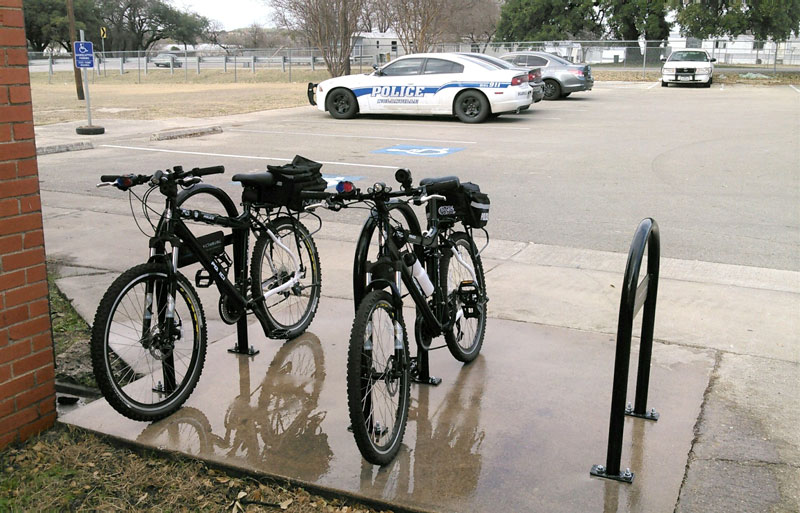 The CTCOG distributed these custom bike racks to municipalities in their region so local officials could install them where they felt they were needed.

The outdoor bike racks were distributed to towns. Officials there are installing them in areas where they see the greatest use.

“I think the bike racks will have a huge impact,” she said. “Vehicles are one of the major issues in protecting the ozone.”

Cheryl Maxwell, the TCOGC Director of Planning and Regional Services, pointed out the key is to educate the public about using a number of  strategies to reduce pollution – walking, bicycling, riding a bus, reducing trips by car, ride sharing, etc.

“It’s a combination of all of those,” she said. “They are all pieces to the puzzle of keeping our air clean.”

Jennifer also observed “Now people will have a safe place to park their bikes.”

“We are very impressed with how the CTCOG used our custom bike racks to not only provide more bicycle parking, but to also include a message to spread the word about how important bicycling is to protect air quality in those communities,” said Chris Luyet, Vice President and General Manager of The Park and Facilities Catalog. “They are able to get much more use out of a bicycle rack with their signage.”

Here’s an organization that is actively working to save the planet – one bike ride at a time.  Starting in a seven-county area in the middle of Texas. Just imagine if every county in America was just as pro-active in striving to protect their air quality.