Posted by: Robert Caston March 31, 2017 in Parks and Recreation 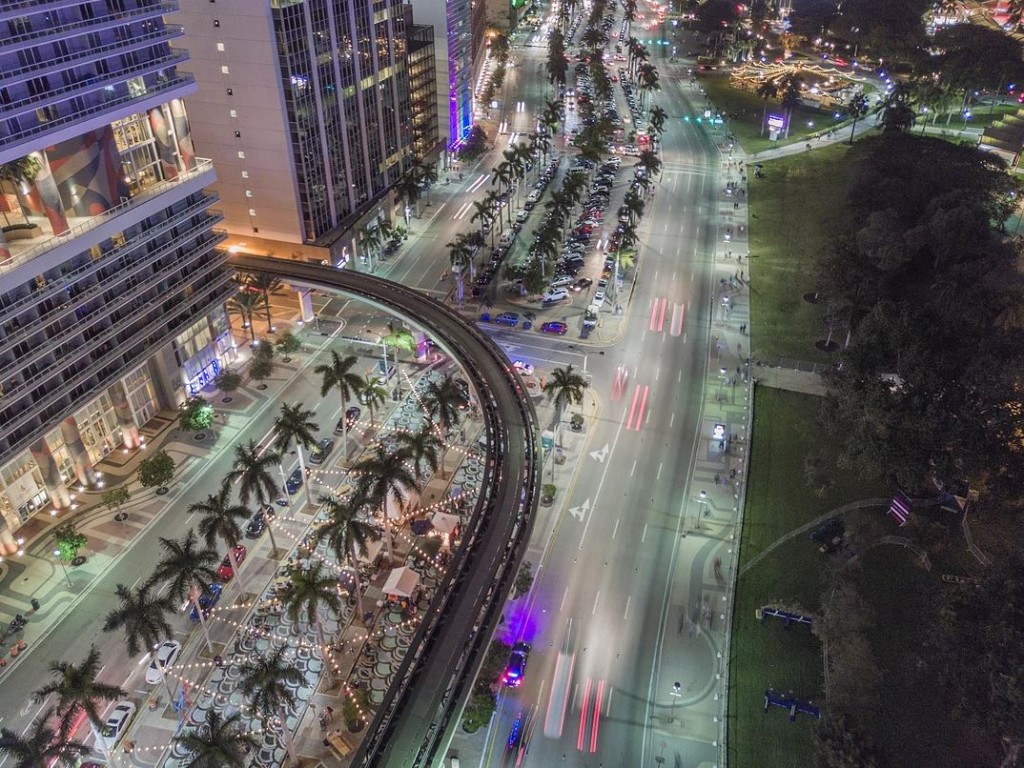 Dogs are probably the only creatures that love parks as much as humans and that’s why dog park equipment was included in an inventive Biscayne Green pop-up park project in Downtown Miami.

For urbanites restrained by all that concrete and steel in cities but who still love the outdoors, this was one cool idea. The Miami Downtown Development Authority basically decided to transform 101 parking spaces in the middle of Biscayne Boulevard into active public space to showcase how these spaces can be turned around into a local destination for green space, entertainment, community and connections, and to gauge the reaction of the local community.

And there certainly was a reaction. The public filled up the park every day during the 20-day event. 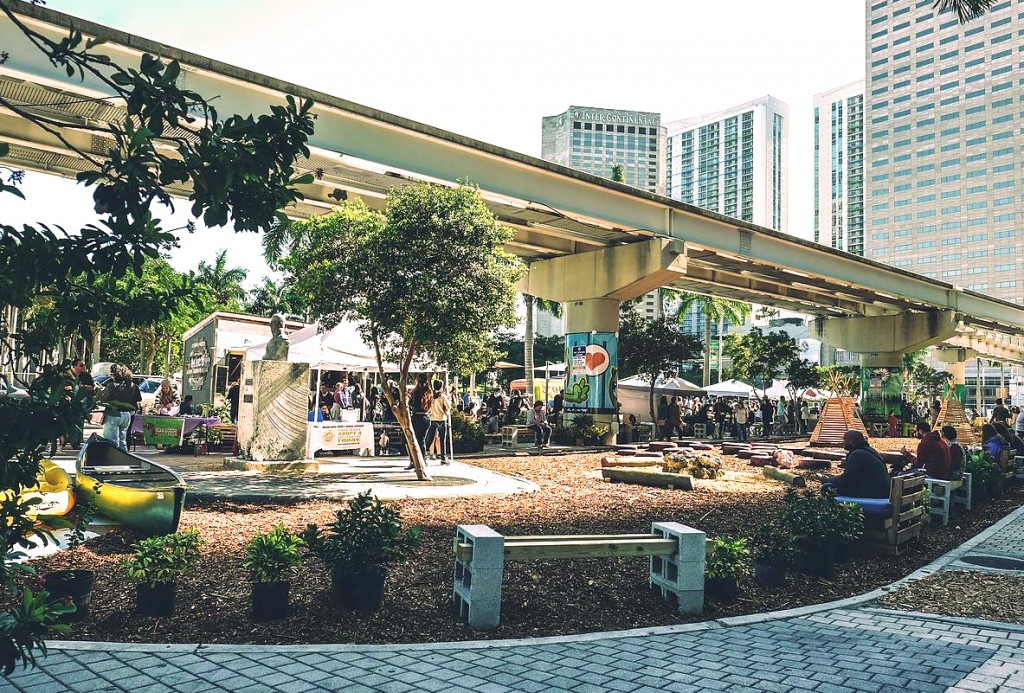 “This was a huge success and we had a great reception from the community,” said Fabian De La Espriella, planning and transportation manager for the Miami Downtown Development Authority which spearheaded the project.

Just by providing those temporary spaces, the DDA created a buzz every day from Jan. 6 to Jan. 26. The pop-up park was located on three blocks along Biscayne Boulevard across Bayfront Park, right under the Metromover rail line – which was also a great source of shade.

The parking lots were transformed with a foundation of mulch, pavement paint, art, and an open lawn made from artificial turf.

“We wanted to make a statement by catering to all these different interests,” De La Espriella explained. “The community response to the public spaces and events planned as part of Biscayne Green are a true reflection of the desires of the local community.” 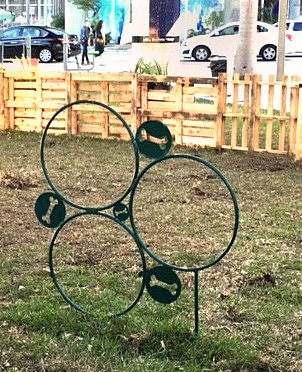 Featured in the dog park were the vertical and rectangular three-hoop dog jumps provided by The Park and Facilities Catalog. These hoops are elevated at different levels so dogs of all sizes can jump through them and get a fun workout.

According to De La Espriella, during the planning stage, they first surveyed local residents to determine their interests.

The park also featured two UpLift Bike Docks from The Park and Facilities Catalog. These unique bike racks are perfect for urban areas because they are designed to provide high-density bicycle parking in places where space is limited.

The front tire of a bicycle is placed in a wheel trough that is designed to keep the bicycle upright. This is a big difference from traditional bike racks where a bike can tip and take up space. By keeping the bikes standing straight, the number of bikes per square foot can be maximized.

Adding bike racks also ties in with the overall theme that the Miami DDA is attempting to promote – steering residents away from using cars and more towards using the various transit options, riding bicycles, using the CitiBike bike sharing program, walking, or car-sharing (Uber/Lyft). 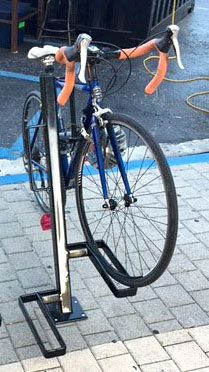 More use of “multimodal” transportation means less need for roads and all those parking spaces. Parking spaces at prime locations, especially within downtown can be used for something more interesting, such as community gathering spaces for people to gather and connect. De La Espriella said the Miami DDA wanted to instill a sense that the city “caters to all street users, not just automobiles.” More than 220,000  people commute to downtown every day for work. Offering options for people to move around the city in different ways is the only way to avoid staying stuck in traffic.

The DDA was interested in “creating a community-oriented event that people could actually identify with and feel that they could just show up and hang out,” De La Espriella said.

Funding for the Biscayne Green project came as the result of the DDA winning a 2016 Knight Cities Challenge award of $146,000 from the Knight Foundation. Other sources, such as the Public Space Challenge from The Miami Foundation, also helped cover the total cost for the $250,000 project.

The concept behind the Knight Foundation’s grant was to challenge creative minds to come up with innovative ideas that would attract young and talented people to urban areas, foster civic involvement and help connect all of those people regardless of their backgrounds.

Several cities were awarded funding for clever projects ranging from a subscription box service that shipped out local goods to “can do signs” with a positive message and a mobile quiz show.

De La Espriella noted Biscayne Green was more than a one-time event. It was a way to bring awareness about what planners want the city to become. Placing more emphasis on public spaces instead of asphalt, and a more livable environment for the community to start experiencing their city in a different way. The goal was to elevate the conversation about the importance of transforming Downtown Miami’s signature thoroughfare from barrier to destination, making downtown a more walkable, accessible, connected and inviting place to be.

“We were proud to be involved in this novel project,” said Michael Kilmartin, senior executive with The Park and Facilities Catalog. “This movement to make cities more people-oriented, bicycle friendly and with alternative means of transportation certainly offers viable solutions to many issues cities face today.”

Viewing the crowds that gathered there for just a three-week period, the Miami DDA certainly has the support of local residents. (See photos of the Biscayne Green pop-up park here).

The result was a confirmation of their beliefs. City dwellers love inviting public spaces and things to do outside their apartments. Build those green spaces with amenities and people will show up. Even for a pop-up park.