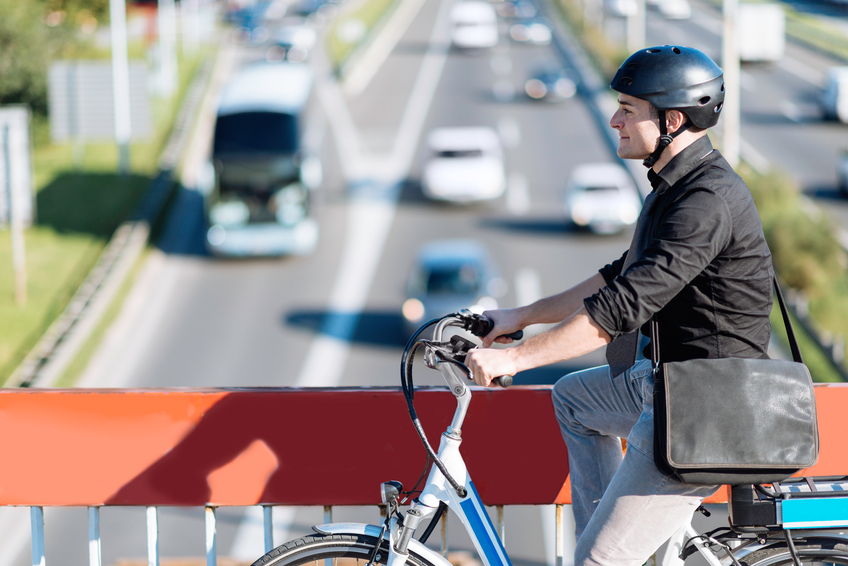 Bike commuter – cities are trying to find ways to accommodate and encourage this form of transportation over automobiles and mass transit.

“The increased number of bike users is very encouraging, given the less than ideal, and sometimes downright dangerous conditions, having to compete with extremely heavy motor vehicle traffic. But given the opportunity, people will take to the streets by bicycle.”

That’s the findings of a recent study, (October 2015), performed by Transportation Alternatives, a street safety advocacy group in New York.

Their study echoes many of the studies performed in major metropolitan areas on the topic of bicycle and pedestrian traffic, generally showing that the public has definite interest in bicycle use for transportation and commuting purposes, but the obstacles and concerns in doing so can keep those people from following through on that interest.

Common obstacles to bicycle commuting and increased recreational riding in metropolitan cities include: 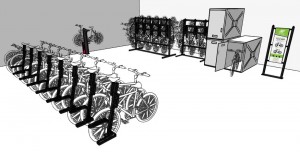 Bike room with high-density bike parking racks to handle a large number of bicycles in a small space.

After meeting with elected officials and local stakeholders, Transportation Alternatives is addressing some of these obstacles in New York by calling for additional Complete Street redesigns for Fifth and Sixth Street in Manhattan.

Complete Streets is a nationally recognized approach to transportation policy and design that “Requires streets to be planned, designed, operated, and maintained to enable safe, convenient and comfortable travel and access for all possible users and all types/modes of transportation”.

The New York City Department Of Transportation’s decision to build protected bike lanes on a portion of Sixth Avenue, from 14th Street to 33rd Street fueled this request.

Transportation Alternatives applauded the partial street redesign, but noted “It’s a start, but much more needs to be done, especially on certain streets that, according to cyclist commuters, are dangerous, and even treacherous in some sections. With higher numbers of cyclists and bike commuters, Fifth Street is in real need of safer routes, especially because it cuts right through the heart of Manhattan”.

The need was accented by a Transportation Alternatives study titled “Fifth and Sixth Avenue Bicycle and Traffic Study”, containing a summary of all the numbers pertaining to bicycle and motor vehicles using these two streets during the spring and summer months.

What they found was that bicycles made up 10% of all road traffic on those two extremely busy streets, with one in four using Citi Bike, a successful bike-sharing program. It quickly became evident that commuters and recreational bike riders want and will use bicycles to reach their destination, if and when available.

Additionally, on the streets that currently have protected bike lanes incorporated into them, the traffic study revealed that twice as many women were regularly biking on the protected lane streets compared to the streets without those amenities.

Females make up 50% of the population in NYC, yet they only account for 25% of the cycling community. This is further evidence that by providing a biking infrastructure that is safe, reliable, and secure ensures more equitable access to a wider range of potential riders.

The public must play a role

Ed McMahon, a senior resident fellow at the Urban Land Institute, says that the future of our cities will be shaped by the public’s willingness to spend the money needed. 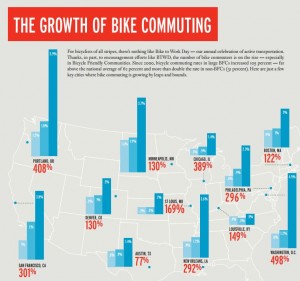 The number of people who commute by bicycle is booming. Source: League of American Bicyclists

In support of this, studies by both the US Census Bureau and the Urban Land Institute put walking and bicycling at the top of the list as viable alternatives to traditional motor vehicle transportation. Improving the quality of public transit road and bridges along with bicycle and pedestrian infrastructure including more bike parking racks are among the highest priorities.

According to Jim Maransky, President of E-Built, LLC, a developer in one of Philadelphia’s hottest neighborhoods, the ability to safely walk and/or bike to local destinations is now a top buying and selling factor in today’s home market.

And with nearly 2 million more bicycles than cars and trucks sold as recent as 2014, it’s with good reason that rental and for sale home communities experience great sales success by supplying bike parking racks and storage areas while advertising their proximity to trails for cycling and walking.

Brian Zumhagen, Communications Director of Transportation Alternatives, says that to break through these perceived obstacles, developers need to first and foremost, look at planning from the bike and pedestrian angle first.

“We need to increase developer interest in providing these types of amenities (such as bike racks for buildings) in their plans”, he said. “We’re attacking this by using bike friendly business campaigns, and it’s been very effective.

Earlier this year, over 200 businesses along Amsterdam Avenue in New York City joined in the campaign, resulting in a Complete Street redesigns, including protected bike lanes, bike parking racks, pedestrian islands, and increased time in the crosswalks.”

It can be done, but the safety concerns of the public have to be met. Current and potential cyclists want to feel safe while riding, and when they arrive at their destination, they need safe and secure bike parking racks to park, leave, and store their bikes.

“There is a huge demand from people who would like to ride their bikes to work and around town,” said Chris Luyet, Vice President and General Manger with The Park and Facilities Catalog. “However, many streets are not safe and more needs to be done to protect bicyclists. Motorists need to understand the road is not just for them.”

Address these issues head on, with input from the cyclists and bike commuters, and you will see the obstacles removed and bike riding and commuting will increase as a viable and sustainable transportation alternative. Imagine if bike lanes were prevalent in our urban areas and mid-size cities and the impact all those bikes instead of cars would have on the environment. This is how you solve pollution, congestion and health problems. It’s that simple.