The benefits of “Forest Bathing” on a park bench.

Take a “Forest Bath” in your local park or wooded area.

Forest bathing is a practice that began in Japan in the 1980s and is catching on worldwide.

During that time in Japan, health practitioners began to notice the toll that the increased industrialization of the country was having on workers. Those long hours created more stress, irritability and health issues.

Americans would be smart to pay attention to this practice as well. According to the Environmental Protection Agency, the average US resident spends 93% of their time indoors.

To find a simple and inexpensive remedy for this ailment, the experts in Japan suggested citizens get out of the house and into the woods.

In essence, immerse themselves in a forest setting.

Forest bathing, known as Shinrin Yoku, combines beliefs from Shintoism and Buddhism and their tradition of connecting with nature.

But this is more than just a walk in the woods. To truly practice Forest Bathing, here are some recommended techniques:

One forest bathing guide also suggests having a conversation with a tree. Express a problem or thought to the tree. Then sit next to it and see what develops.

Just like a bath, the idea is to soak in the forest and feel the calming effects as all the different elements surrounding you. 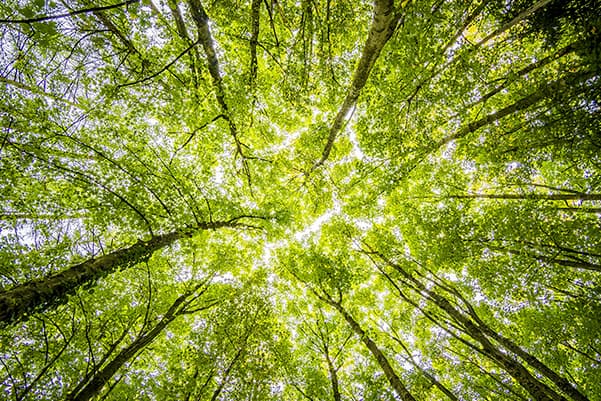 Science supports the benefits of visiting a park

This program works. It’s backed by scientific studies that found that exposure to greenery and fresh air can actually lower blood pressure and cortisol. Resting in a forest also helps to clear your mind, reduce stress, improve focus, increase energy and even improve sleep.

In fact, one study says when a person is in a forest, they are actually inhaling anti-microbial organic compounds emitted by plants.

They are called phytoncides. Exposure to these micro-substances has been shown to boost humane immune systems.

In essence, a person experiences a sprinkling of free aromatherapy from nature.

Not a bad form of therapy. Especially when you can do it sitting on a park bench for free.

This is a serious program in Japan. There are more than 30 official forest bathing sites. (Although why does it have to be official? A park is a park. Perhaps the designation gives the area more credibility to visitors. In addition, at some of those sites, there are guides and programs for dietary management, hydrotherapy, and aromatherapy).

There is also a Society for Forest Medicine in Japan. The president, Dr. Qing Li, authored a book on the subject titled “Shinrin-Yoku: The Art and Science of Forest Bathing.”

A type of forest medicine is catching on the US in another form – doctor’s prescriptions.

There is now a ParkRX movement where doctors recommend walks in a park as a treatment for their patients.

Might seem simplistic. But doctors find that if they write an actual prescription, it is more likely to inspire a person to talk a walk in a park. Plus, there is always the follow-up from the physician at subsequent visits.

Soaking in a forest, hiking or just sitting on a park bench also points to one other major benefit.

The value of parks. Whether they are enormous national parks such as Yosemite or just a local urban park with a handful of trees. The health benefits of hanging out in a park make them even more valuable than ever to its citizens.

In this digital age and the era of information workers stuck indoors, humans should make it a habit to allocate time to spend outside.

To truly reap the benefits, people need to become fully submerged in a lush, green, forested area with plenty of trees, bushes, and grass.

We just need to increase the frequency to enjoy the benefits.

As more and more people move to urban areas, we must also do our best to preserve and increase the number of green spaces and trees where we can engage in the healing powers of forest bathing