How The First Tweet Was Sent From A Park

Posted by: Robert Caston January 31, 2020 in Parks and Recreation 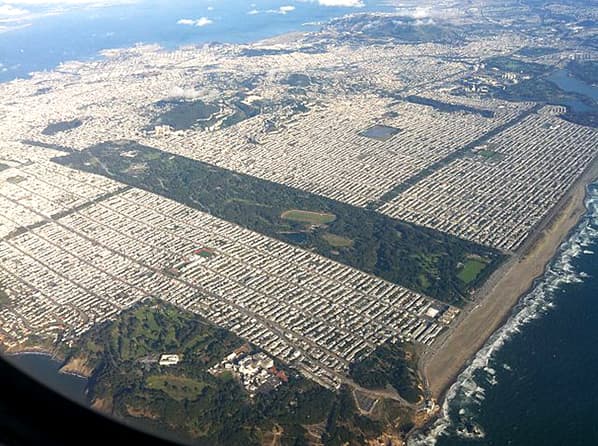 Golden Gate Park (center) in San Francisco, where the first “tweet” was sent. (Photo by Hispalois).

Few people know this, but for all the time techies spend indoors in cubicles, the first test Tweet was actually sent from a park.

In 2000, the young coder lived in San Francisco and had developed a program that let him repost an email to as many people as he wanted.

To try it out, he went for a walk in the famous Golden Gate Park. The park actually covers more than 1000 acres. But what’s unusual about the terrain is that the land originally consisted of sand dunes.

There are other weird facts about the park.

For example, bison live there. That’s correct, right in the middle of the city. The buffalo graze in a meadow to represent the original herds that frequented the park. Other animals that once lived there include caribou, antelope, moose, and coyotes. (Some coyotes still frequent the park).

On this particular soon-to-be-famous day, Dorsey said he walked to the bison area and sent this message to several friends at once: “I’m at the Bison Paddock watching the bison.”

A moment you could almost equate with Alexander Bell making the first phone call.

However, as with any new technology, the first version didn’t really impress anybody.

For one, back then, Dorsey realized few people had a mobile e-mail device.

And he also admitted in a Vanity Fair article, “No one really cared what I was doing in the park.”

Interestingly, the whole concept of Twitter did not catch on immediately from that point.

While a natural software programmer, at that point in time, Dorsey was still young, searching for a career and pursuing other paths at the time.

He tried his hand as a massage therapist, plant illustrator, and fashion designer.

In fact, he just started designing clothing and was about to focus on his favorite item – jeans – when Twitter started taking off.

The rest, of course, is history.

About 500 million tweets are sent EVERY DAY.

And to think, that first Tweet started in a park.

Other strange facts about this famous park

Many of us know there is something magical about a park.

Golden Gate Park certainly has several attributes that make it an interesting place.

For example, it is home to the first public playground in the US. The area is called Koret Playground.

The park is also home to the oldest yacht model club in the country. The San Francisco Model Yacht Club first began way back in 1898.

Ironically, Golden Gate Park was almost designed by one of the most famous landscape architects in history. But instead, the park became a project accomplished by a 25-year-old civil engineer.

That occurred after the “Father of Parks” – landscape architect Frederick Law Olmsted turned down the project.

Olmstead, who is famous for designing Central Park in NYC and many other famous urban parks, reportedly didn’t like the San Francisco location.

He felt it was impossible to build a park on the sand dunes. (Guess you can’t get them all right).

In addition to the great views, large expanses of grass and the buffalo, the also park features a Japanese tea garden, two waterfalls, and a windmill.

There are 22 statues in Golden Gate Park. Which is not a big deal in itself.

But one was installed to honor a man who hated statues. That person was coincidentally, the person who ran the park.

On his 65th birthday, perhaps as a tongue in cheek gesture, a statue was created to honor John McLaren, superintendent of Golden Gate Park for 53 years.

He reportedly did not like the statue. So, he hid it.

However, after his death, the statue was found and placed in the park.

How a walk in a park can be inspiring

What’s the point of all these interesting facts?

Perhaps to acknowledge that interesting things can happen at a park.

Studies have shown taking a walk in a park has many benefits, including stimulating mental activity.

As the famous philosopher, Friedrich Nietzsche said, “Only thoughts conceived while walking have value.”

Famous writer Henry David Thoreau said, “Me thinks that the moment my legs begin to move my thoughts begin to flow.”

Here’s another quote about walking: “Walking is magic. Can’t recommend it highly enough. I read that Plato and Aristotle did much of their brilliant thinking together while ambulating. The movement, the meditation, the health of the blood pumping and the rhythm of footsteps…this is a primal way to connect with one’s deeper self.” – Paula Cole.

Take a walk in a park. You might see people walking, talking, painting, writing, reading and participating in yoga.

Or take time to sit on one of the outdoor park benches and just observe.

Who knows, like Jack Dorsey 20 years ago, you could see someone inventing a product that just might change the world.

Photo by Hispalois from Wikimedia Commons.