Posted by: Robert Caston May 18, 2018 in Community Building 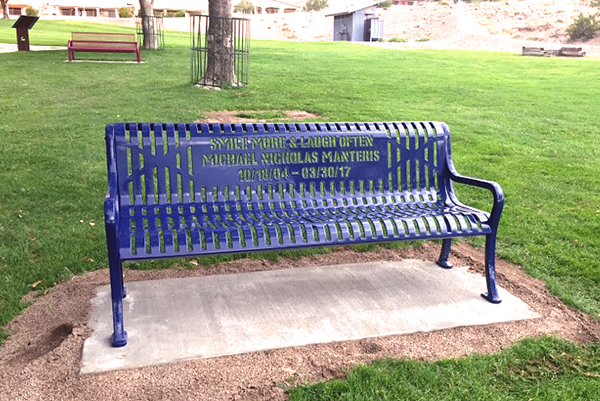 One of two memorial benches installed in Boulder City NV as a tribute to a student who passed away after a battle with leukemia. The message reads: “Smile More & Laugh Often.”

Sometimes an entire community will pull together to create something awesome and this occurred recently in Boulder City, NV, when students came together to install memorial benches to honor one of their fallen friends.

According to teacher Azure Quinlan, one of her former students, Michael Manteris, was a very popular youngster in town who unfortunately was stricken by leukemia.

“He was well known in the community and was always kind, thoughtful and determined to succeed,” she said. “When he passed away I wanted to do something special for his family and the community who loved him and prayed for him throughout his fight.”

So she decided to put together a coin drive and snow cone fundraiser to see if she could enough raise funds for her project. She reached out to the schools that Michael attended – Mitchell Elementary School, Martha P. King Elementary School and Garett Junior High School.

The students and community jumped right in. 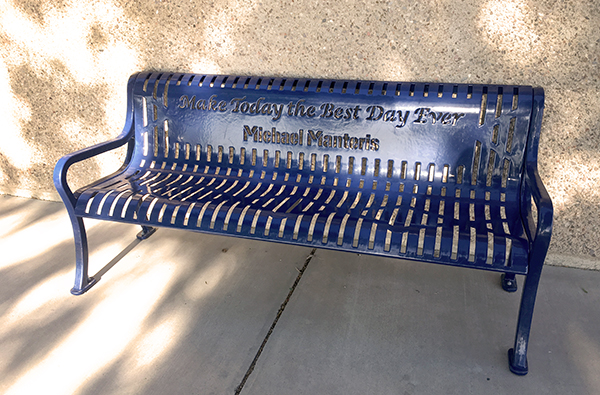 Memorial bench for Michael Manteris with the inscription of one of the 12-year-old’s favorite sayings: “Make Today The Best Day Ever.”

All the schools held a drive for two weeks to raise money. Older students at the Boulder City High School even volunteered to help.

“The kids and community were extra generous with their piggy banks, coins and bills,” she said.

The funds came in and Azure said she was able to actually purchase TWO memorial benches to honor Michael. She coordinated the project with Julie Calloway, City of Boulder City, Parks and Recreation Administration Coordinator.

One was placed in a picturesque spot at Hemenway Park overlooking Lake Mead “where his family could watch the sunrise.” The other memorial bench was placed at Mitchell Elementary School “as a daily reminder that everyone has the power to have the best day ever,” she said.

“I was absolutely amazed at the sheer kindness and generosity that the entire Boulder City community demonstrated following the loss of a beautiful life,” Azure said. “Michael was and forever will be an integrated part of our community.”

This project is not only a tribute to a fantastic young man. It’s also a tribute to a teacher and a wonderful community that rallied for a great cause when called upon. 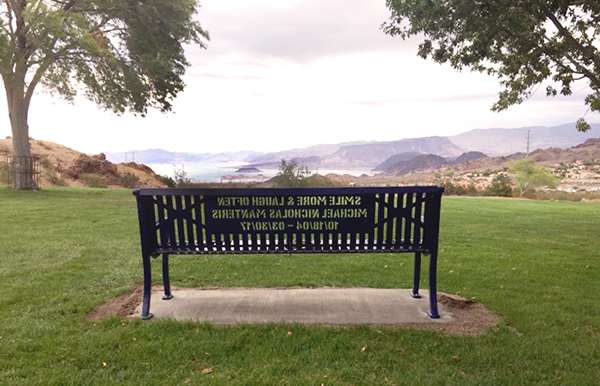 One of the two memorial benches in Hemenway Park overlooking Lake Mead.