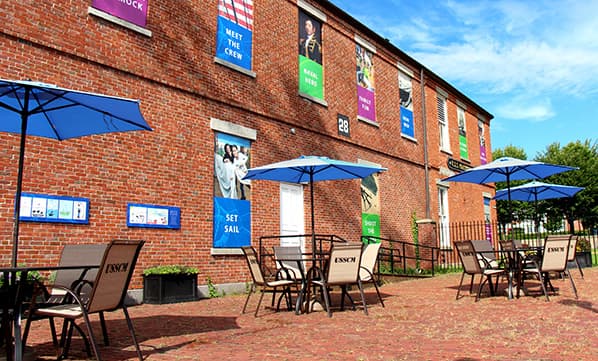 Picnic Tables located outside the USS Constitution Museum along the waterfront in Boston.

The Park and Facilities Catalog is proud that our picnic tables are now provided at one of the most interesting maritime museums in the country.

That facility is the USS Constitution Museum located in Boston’s Charlestown Navy Yard along the waterfront.

The USS Constitution Museum is featured in a restored shipyard and offers an in-depth and interactive look into the famous ship that earned the nickname “Old Ironsides.”

The ship, the USS Constitution, is a mighty, wooden heavy frigate with three gigantic masts. It is the world’s oldest commissioned U.S. Navy vessel that is still afloat.

Constitution is famous for incredible tales of combat on the open seas in the War of 1812. Launched in 1797, the Ship’s name was approved by President George Washington and is one of six built to defend the country in war and against pirates.

The Ship’s first assignment was to protect American merchant ships from pirates off the Barbary Coast. During the War of 1812, the amazing USS Constitution was known for defeating five British warships and capturing numerous merchant ships.

Incredibly, Constitution, which was built more than 200 years ago and retired in 1881, still sails. The Ship frequently sails under her own power, such as in 2012 when it commemorated the 200th anniversary of her victory over the British ship HMSGuerriere.

The USS Constitution Museum is the place where people can learn about the history behind this extraordinary vessel and life at sea in days of old.

The facility, managed by a private, non-profit organization, offers insights into the Ship’s history during war and peacetime. They offer interactive displays, multi-media presentations, archives, books, games, and hands-on activities.

There is also a display that chronicles in detail the famous battle between the Constitution and the HMS Java.

They are the Samuel Eliot Morison Award for public service, the Charles Francis Adams Award for those who contributed to the betterment of the community, and the Don Turner Award for those who help preserve historic vessels or advance research into ship design and construction from the past.

The museum’s mission, posted on its website, is “to engage all ages in the story of “Old Ironsides” to spark excitement about maritime heritage, naval service, and the American experience.”

Opened in 1976, more than 300,000 people now visit this exciting destination every year to learn and explore.

Working with the Boston Planning and Development Agency, the Museum created a space for public use at the base of Dry Dock #2. People can now enjoy a new waterfront patio with seating and umbrellas for shade.

The tables sit below a brick wall with an array of colorful banners promoting the museum.

Nearby, visitors can check out a series of “telescopes to the past.” When pointed at different locations, the telescopes show historical images from the past, in essence, taking users back on a trip back through time.

The tables create an inviting place for a family or friends to spend an afternoon or evening.

“We are proud that our products are located at such a prestigious facility as the USS Constitution Museum,” said Jessica Kyriakos, Vice President and General Manager of The Park and Facilities Catalog. “This museum truly provides a great service in educating the public about the history of this amazing ship and its brave crews and officers.”