Can You Name The Most Popular Songs About Parks?

Posted by: Robert Caston January 4, 2019 in Parks and Recreation 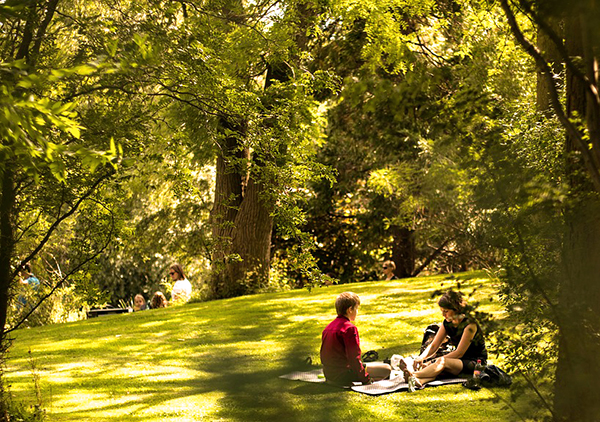 Believe it or not there are at least 80 songs with the word “Park” in the title, reminding us just how much those green spaces hold a special place in our lives.

One of the most famous and well-known songs about parks has got to be the emotional and partly nonsensical song “MacArthur Park.”

This tune was written by one of the most popular songwriters of all time – Jimmy Webb. He also penned such monster hits as “I Am a Lineman for the County” and “Up, Up and Away.”

Here’s another interesting tidbit: MacArthur Park really does exist. This famous patch of land is located in Los Angeles, CA.

Webb said he got the idea for the song after he broke up with his girlfriend. When they were together, they would meet in MacArthur Park for lunch and those fond memories provided the inspiration for his famous tune.

He said all those images in the park were real: especially the legendary cake left out in the rain.

Fate would have it that actor Richard Harris would meet Webb at a fundraiser in Los Angeles. The actor was just coming off his hit performance in the movie “Camelot” where he sang several of the musical numbers. He decided he wanted to record an album.

Webb didn’t believe him, but later agreed to meet with Harris in London. The songwriter pitched several songs to the actor, which he rejected. The last song he suggested was “MacArthur Park” with its strange structure with all its string, woodwind and brass overdubs, length and weird references. But Harris made the right decision and the rest is history.

The song certainly resonated with people when it was released in 1968. It hit No. 2 on the Billboard 100 in the US, No. 1 in Canada and Australia and landed in the top 10 in several other countries.

There are a few other amazing facts surrounding this popular hit song.

For one, it was originally written for the band The Association to sing. But the group turned it down. Claimed the lyrics were too spacey and hard to understand.

Secondly, the song was 7:21 minutes long, a length that violated the standard three to four minute average for Top 40 AM radio airtime.

Didn’t matter. Listeners loved it and it went on to become one of the most popular tunes of all time.

By the way, the Harris put his own spin on the lyrics and called the park “MacArthur’s Park” with an apostrophe “s.”

Later, Donna Summer recorded and released her own version of the song and that also became a big success.

You can almost say, tongue in cheek, they’ll “never have that recipe again.”

While MacArthur Park is kind of a sad composition, this next song regarding open spaces and chilling out on the weekend is more upbeat.

That would be the catchy tune “Saturday in the Park” written by Robert Lamm and performed by the band Chicago.

Lamm loved to spend time in parks – watching people laughing, children playing and listening to guitars. When he wrote the tune he described how witnessing the happy activity in some parks made it seem as though “Every day’s the Fourth of July.”

Here’s an interesting twist about this song few people might not know.

While the band Chicago is obviously from the Windy City, Lamm actually got the inspiration for the song after walking in Central Park in New York City. The story goes the band was there to record an album and between takes Lamm spent time hanging out in one of the most well-known urban parks in the world.

The next song that was a big hit at one time despite its strange name is “Itchycoo Park” sung by the Small Faces (the band that would later evolve into “Faces” with Rod Stewart.)

This song was written by Steve Marriott (later of Humble Pie fame) and Ronnie Lane.

There isn’t actually an “Itchycoo” park. The catchy song was written by band members about different parks in England they remembered that were filled with nettles and sometimes caused visitors to get an itch.

Laugh all you want. That song made the cash registers ring. Written in 1967, the song went on to hit No. 3 in the UK Singles Chart in England and No. 16 in the US.

British magazine NME ran a poll and their readers ranked it 62 out of the 100 most popular singles of all time.

Pretty good for a tune about irritated skin in an outdoor setting.

Of course, there are many other songs with the use of the word “Park” in them that were somewhat popular but not huge hits like “MacArthur Park.”

That would include The Country Hams song “Walking in the Park with Eloise,” which was re-recorded by Paul McCartney and Wings.

“Central Park Stroll” was written by John Lennon and Yoko Ono, who lived in that famous Dakota townhouse that faced the park. Later, after Lennon was tragically killed outside of his home, a portion of the park was named “Strawberry Fields” in his honor.

For rock and roll bands known for their raucous music inside a concert hall, surprisingly several bands penned songs about parks. They include: Uriah Heep, The Ramones, The Zombies, Foo Fighters, Van Halen and Rush.

That’s because everybody, even rockers, have great experiences and memories about parks. And when you are just starting out with little money, a park is a great place to spend the day.

So why not write a song about them?

Here’s a list of songs with the word “Park” in the title.

Parks today are as popular as ever and are still creating fond memories for visitors.

Hopefully, in the near future, there will be a songwriter out there who will sit down on a park bench and write the next big hit about their favorite green oasis, something all of us can relate to.