Because the price of metal has risen over the years, some individuals seem to think they can make a windfall by stealing a set of aluminum bleachers from local ball fields.

There’s only one thing wrong with this scenario (as many of the crooks get to contemplate while in jail).

How do you sell them? A 10-row aluminum bleacher is not something you can pawn off in an alley like a watch or a bicycle.

The only place to try to sell the scrap from aluminum bleachers is at a metal recycling center. Well guess what? The police know that too.

The country has been plagued over the past few years with ambitious yet wisdom-deficient crooks who think it’s clever to steal aluminum bleachers. They spend a tremendous amount of effort removing them, hours upon hours chopping them up, and then wasting more time hauling the scrap to a recycling center.

For the most part, all of these thieves were caught.  The problem however, is that in their foolhardy efforts, these miscreants destroy row upon row of perfectly fine aluminum bleacher planks that parents and children were planning to sit on.

Authorities and businesses are stepping up to stop this worthless exercise. The Institute of Scrap Recycling Industries recently created a web site called “ScrapTheftAlert.com” where site managers can call and report any aluminum bleacher thefts. (Or other crimes involving stolen metal. That includes items such as copper wiring, road signs, manhole covers, cemetery urns, water pipes, etc.). An alert is then issued to more than 1,000 processing centers to be on the lookout.

In many areas, law enforcement has worked with local recycling centers to have them report any suspicious activities. The recyclers are required to get the name and photo identification of those submitting the raw materials and background on where the scrap is coming from. The companies are told they will be held responsible if any ill-gotten scrap is processed. 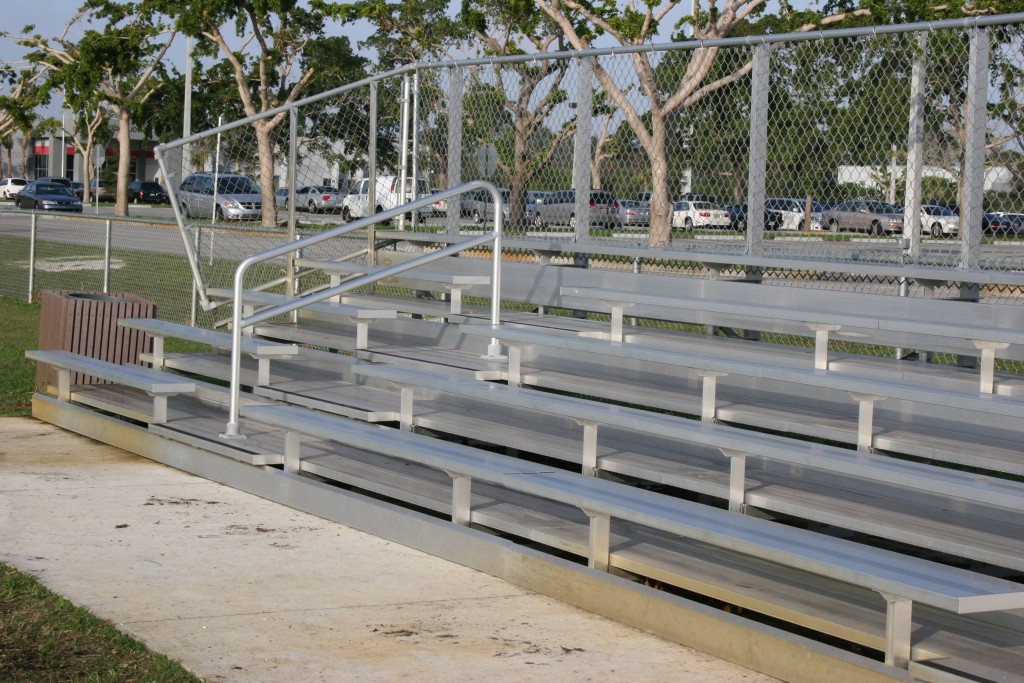 Some states and towns have even passed laws requiring a license for anybody who transports a large amount of used scrap metal.

Another strategy is to put some sort of identifying mark all over the bleachers so the recycling centers can clearly see where the metal originated. Place a sign on the bleacher letting thieves know when they scope out the scene, that local recycling centers have been placed on notice not to accept this type of raw metal.

It’s a foolish crime. Yet athletic directors, athletes and their fans must also suffer the consequences. Site managers would be smart to take a few extra steps to make sure their aluminum bleachers remain intact.

That big chunk of shiny metal might be too tempting for some people to resist. But a few simple steps can send them in the direction of legally gathering discarded aluminum cans and leaving the aluminum bleachers to the fans.

For the ISIS page on the theft of metals, click here.

Note: If you are in a hurry for bleachers, the Park Catalog has a ParkExpress program where some smaller 3 or 4 row bleachers can be shipped in just 3 days!