Posted by: Robert Caston January 21, 2020 in Parks and Recreation 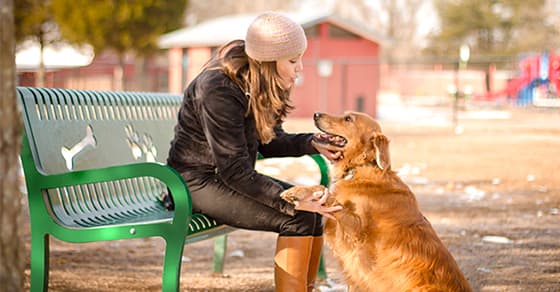 How the first dog park was founded and how it led to a boom in doggie playgrounds across the US.

Few people know that when they are at play in a dog park, there was one woman, Doris Richard, who played a major role in the development of places for canines to play in America.

In fact, Doris was the founder of what is considered the first city dog park – Ohlone Dog Park in Berkeley, CA.

The first dog park had an interesting start.

The area chosen for the dog park was initially a vacant piece of land that remained after the construction of a BART subway station.

BART planned to use the land for residences. But a group of activists took over the property and called it “The People’s Park Annex.”

Part of the “People’s Park” was used as an off-leash area where dogs could play.

Doris was instrumental in gathering petitions, working with the animal control workers and approaching city officials about officially designating the area for dogs.

City officials were skeptical at first. It’s understandable, there were no dog parks in the country then. They were concerned about liability and insurance.

But Doris and a large group of volunteers would appear at the city council meetings dressed in matching t-shirts advocating for the park. After seeing that wave of turquoise shirts, the authorities agreed to give it a try.

As a cautious first step, they decided the area was initially to be designated as an “experimental dog park.”

But in 1979, the first off-leash doggie playground in America became official.

It was named Ohlone Dog Park. The word “Ohlone” was chosen to represent the name of the indigenous people who originally lived in the Bay Area.

In 1984, Doris then helped form a group called the Ohlone Dog Park Association to help maintain the park and to thwart several attempts that were made to get rid of it. The association also worked as an advocate for dogs and helped to create other dog parks in the city.

The park became super popular. Word began to spread. Around the city. Then the state. And then the country.

Doris constantly received calls from people from all over asking her advice on how to create a dog park. She responded to them and tried her best to help.

But he legacy of Ohlone Dog Park continues to this day.

It was named one of the Top 10 Dog Parks in the country several times by Dog Fancy magazine.

The National Recreation and Park Association reports there are now about 569 dog parks in the largest 100 cities in the US. This is the fastest-growing type of park amenity.

When Doris retired as ODPA president, the membership added a blue fire hydrant with a plaque to honor her dedication and drive.

“Doris, with the help of just a couple of other people, popularized dog parks worldwide, and dogs and their humans around the world owe so much to her,” said Dr. Ian Dunbar, an animal behaviorist and author in a press release from ODPA. “She had a bounty of common sense and resolve, and never backed down. She will live in so many delightful memories, and I shall miss her warmth and compassion with huge sadness.”

That fire hydrant serves as a nice reminder of one woman’s passion to provide a fun place for dogs to play and run free in an urban setting, without the constraints of a leash.

And serves as a reminder of a movement that resulted in the creation of hundreds of dog parks around the country and world, where thousands of dogs get to play every day.

Note: The Park and Facilities Catalog is a strong advocate for dog parks and provides a full array of dog park equipment so owners and their pets can interact together, learn and get a great work out.