A Bike Repair Station added to a trail in Colorado by local Boy Scout Brennan Truitt.

A Bike Repair Station can be a welcome sight for any cyclist who finds themselves out on the road with a flat tire or a bike that needs repair.

But for Boy Scout Brennan Truitt, the need for a bike repair station in his area was personal as well.

Brennan said his mother was out riding one day on the Poudre River Trail Corridor between Greeley and Windsor Colorado and her bike got a flat tire. There was no way for her to fix the tire.

For an Eagle Rank Service Project, Brennan decided to provide a solution for other cyclists who found themselves in the same predicament.

He raised money from local bike stores and businesses and purchased a Bike Repair Stand from The Park and Facilities Catalog.

The Bike Repair Station was placed on the trail next to a bench.

Now, cyclists have a place they can turn to for repairs and tune-ups.

“I chose the one from the Park Catalog because it had a great selection of tools and could have a commercial-grade pump along with it,” Brennan said. “I like the bike repair station I chose because it has great features and tools that can repair just about any bike issue.” 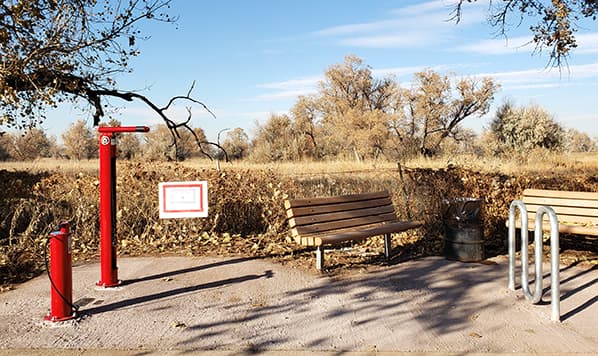 Bike repair station with air pump provides a service for cyclists out on the trail.

The Bike Repair Stand does come with a handy array of tools. And for many different types of bikes.

The tools include Philips and flat head screwdrivers, Allen wrenches plus headset, pedal and box wrenches.

To keep them secure, the tools are fastened to the stand with a sturdy aircraft-grade cable made with stainless steel.

Included with the Bike Repair Station is a handy air pump to fill up deflated tires or fix a flat tire. The air hose is made with rubber and wire mesh for durability.

Convenient hanger bars are used to hoist up a bike for easier access to inspect, adjust or clean out parts such as derailleurs or brake pads.

The metal casing is available in a vibrant array of attractive colors – bright yellow, dark purple, deep red, hunter green, iron-gray, orange, white, black, brown and several others. The powder-coated finish is electrostatically applied with an epoxy primer that adheres to the metal, protecting it against rust and corrosion.

Another option is to order the station with a galvanized coating that is tough, rust-free and weather resistant.

These bike repair stations were designed by cycling experts. They are built tough to withstand constant use by the public.

Minimal maintenance is all that is required, and the product can easily be cleaned with just soap and water.

At The Park and Facilities Catalog, we see more and more facilities adding these handy bike repair stations.

They are appearing at parks, libraries, dorm rooms, parking garages, and office buildings.

More apartment buildings are adding indoor bike rooms (some actually required by city ordinances) and they are featuring bike repair stations as a nice amenity. The footprint for this bike stand is minimal, just 10 inches in diameter at the base with a 90-inch by 45-inch space recommended to accommodate a bike under repair.

In fact, bike rooms are one of the hottest amenities now being promoted.

In New York City, the City Tower building promotes its beautiful bike room located on the 19th floor with sweeping views of the area.

It’s certainly nice to see this feature added to the beautiful Poudre Trail, a 21-mile pathway that winds through Greeley, Windsor, and Weld counties. The concrete trail runs alongside the river and mirrors the journey that French Canadian Fur Trappers once took in the early 1800s. The project was built with $8 million raised by grants and donations from foundations, businesses, individuals and local governments.

Congratulations to Brennan for recognizing a real need in the community and providing a solution. We know local cyclists will appreciate this nice addition on this popular trail.

And we’re sure a proud mom will too.