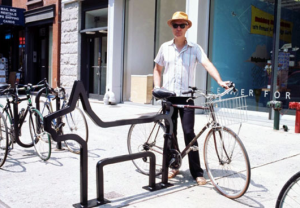 I have admired David Byrne for as long as I can remember.

I was stuck by his unique and creative musical talents as a teenager. I was a child (teenager) of the eighties and there was no one on the musical scene like David Byrne and the Talking Heads. As I grew older, I lost track of Byrne and so many other great musicians, until he emerged as host of a Sunday evening PBS music program which was terrific. Over time I discovered we shared a passion for cycling as a form of transportation and a “vehicle” for exploration.  As fate would have it, we both see the bike rack as an opportunity for artistic expression that in a subtle way makes bicycle commuting a little more fun and cool.  Of all the products we design and sell at The Park Catalog, custom bike racks are by far my favorite and I was inspired by David Byrne’s New York City custom bike rack design contest to challenge our designers and myself to conceive of even more creative designs that inspire our customers to not only promote bike riding with adequate bike parking but also to make their environment a little more fun and hip in the process.

As fate would have it, David Byrne and I would cross paths in the most unlikely of places: Paraty, Brazil.  Kate, my wife, and I decided we wanted to see Brazil and so, as I always do before setting off on a new adventure, I called my friend Andy Tarica the adventure travel maven and he said you have to go to Paraty.  I did a little research and found that not only was Paraty a beautiful seaside village with a rich and dark mercantile history, but it experienced a renaissance as an artistic community since a new highway was built connecting Rio and Sao Paulo that passes through Paraty along the way.

What intrigued me about the place was that it was a seaside village with high mountain plains and a rain forest in its mountain areas.  Paraty has a cattle ranching and farming community which meant the opportunity to see its high pains and rainforest on horseback!  The story of how I inadvertently “brought in the herd” of 200 plus cattle after stopping at a back country cachaca distillery, sampling all 16 flavors of infused cachaca, and almost losing my horse, is a story for another blog.

We discovered when we got to Paraty that there was a literary festival called FLIP beginning in a few days and that David Byrne was participating. Take a look at this article about the event.  I invite you to read it and see for yourself that Byrne just won’t stop making sense about commuting and exploring by bicycle.

For information on how you can create you own custom bike racks with any type of design or logo, contact The Park and Facilities Catalog.