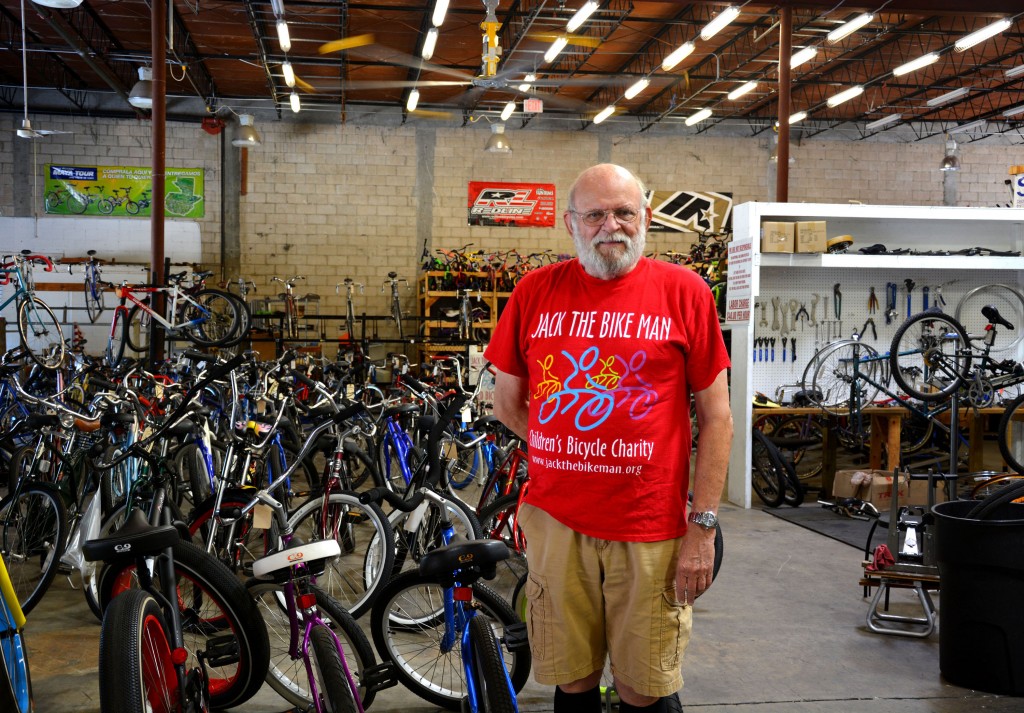 Jack the Bike Man Hairston in the charity’s massive warehouse of bikes that are rebuilt and given to those in need.

When some guys retire they like to spend their days playing golf. Not Jack Hairston. He likes to give away bikes. Not just a few of them, but thousands of them. To needy kids and their families.

“I just wanted to make the community a little bit better,” he says, and adds “What else would I be doing?”

At the age of 75, Jack “The Bike Man” will be at it again this holiday season.

His bicycle giveaway is an annual spectacle in West Palm Beach, Fla., that attracts hundreds of families every year. From his enormous warehouse with the giant bicycle mural painted on the front, he and a dedicated team of volunteers distribute recycled bicycles to at-need children of all ages. This is an event that really can make a big difference for a child or family without a bike. 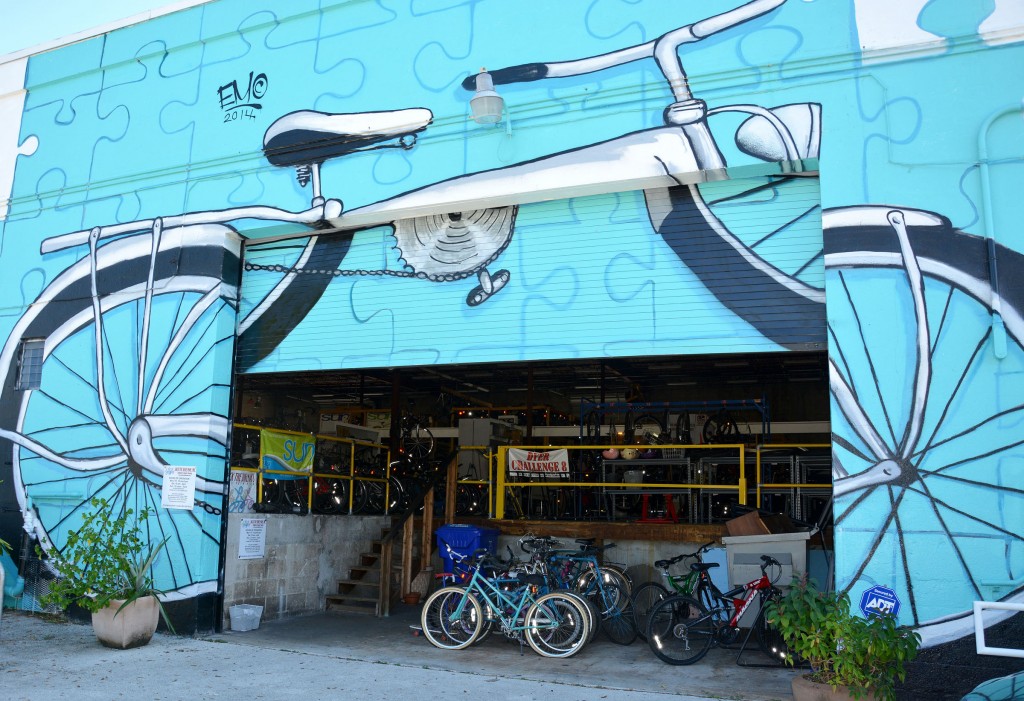 They don’t just give away bicycles and walk away either. The team of volunteers helps every new bike owner by making adjustments to the bike so it handles perfectly. They also give some tips on how to properly maintain and care for their bike so it last longer.

There’s more to this annual giveaway than a one-day bike fest. The rest of the year there’s a gigantic effort to collect and repair donated bikes. Combine that with an ongoing program to raise funds to keep the operation functioning and the lights on.

For one, when you give away 1,000 of bikes, you need to find a way to continually obtain bikes. Jack and his crew achieve this with a steady stream of donations by people who clean out their garages and realize they no longer have a need for them. Or a local community or church will conduct a drive to gather used bicycles and send them to Jack.

Jack will take most any bike that comes in. If it is inoperable, his crew will strip it down for parts. Take a walk through his huge warehouse and you will see shelves upon shelves of wheels, handlebars, frames, all neatly stacked for use later.

Then there is the repair. Jack the Bike Man employs a handful of workers who rebuild the bikes in a well-equipped repair shop. Here’s another facet of the organization’s generosity. Many repair people who have worked in the warehouse do it as part of required community service. Or if they are down on their luck, as a job with pay. Jack’s group teaches these people a new skill and helps them get back on their feet.

Youngsters can also volunteer to assist. And if a youngster comes up asking for a bike, Jack will sometimes give it to them, as long as they put in some hours at the shop.

He keeps a lot of people busy.

As you can imagine, an operation of this size requires funding. Some of the group’s income comes from the sale of bicycles that are donated. If you visit his enormous warehouse, there are bicycles of all types available for sale – road bikes, mountain bikes, beach bikes, racing bikes, you name it. All of them at bargain prices.

For the true bicycle aficionado, Jack also has a selection of very cool and rare vintage bicycles. Some are very old, some are very unique but all of them are bicycle treasures.

How the bicycles are distributed

Over the years Jack has perfected the process of determining the recipients of his bicycles. Smartly, he utilizes local churches and charities to help screen applicants and find poor families that would really be helped with a bicycle.

He has also arranged for bicycles to be shipped to certain areas where children are in need and can’t make it to his warehouse. In addition, he has shipped containers of bicycles to places such as Guatemala where a bicycle could make an enormous difference in someone’s life.

If you look at the big picture, there is a quite a bit going on with this organization. In addition to the bicycle giveaway, the group conducts bicycle education programs to develop creativity, self-esteem, responsibility and leadership

Jack “The Bike Man” can get value out of just about any bicycle for rebuilding or for parts.

This is also the age of promoting sustainability and recycling the earth’s resources. Instead of sending bicycles to a landfill, Jack’s group restores them and puts them back in circulation.

Their vision statement is simple: “To create a community of healthy active individuals by providing hope to the less fortunate through support, training and access to bicycles.”

How it all began

That vision started simply one day when Jack was sitting at home and noticed a young person was having difficulty with a broken bicycle. He approached the individual and offered to help them repair it. A friendship was created.

That person then brought others from the community.

It was at this point that Jack had an “aha” moment. He could see how just a simple bicycle could make a major impact in the lives of many people who did not have cars or a way to get around town.

Now his location on Florida Avenue in West Palm Beach is massive. All you see are endless rows and rows of bikes and bike parts.

Obviously, to keep this charity going, money is required. If you are interested in donating, go to www.jackthebikeman.org.

The charity is a non-profit 501c. Donations are tax deductible.

Gathering used bicycles is also a great project for Boy Scout Troops, church groups, civic groups such as a Rotary Club or just homeowner’s associations that perhaps want a fun project to embrace. 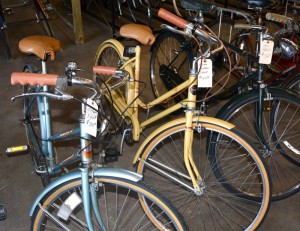 A selection of vintage bikes for sale that should catch the eye of every collector.

Another way to help out is to purchase a bicycle from Jack the Bike Man. As we said, he does have some incredible gems in his vintage collection. Or, if you just need a bike, consider the variety they have in the store. Out of towners can easily ship a bike using services such as www.shipbikes.com or FedEx. A typical cost to ship a bike one way using FedEx Ground is about $40-$50.

For locals in the West Palm Beach area, you can also help out by bringing in your bike to their shop for repairs or a tune-up. You can also rent bicycles.

There are plenty of organizations that provide donations during the holiday season. They give away toys, food and money.

But there’s something special about a bicycle. It’s empowering – it’s a device that gives an individual the freedom to go from Point A to Point B without the need for a car, buying gas or waiting in traffic.

Plus, a bicycle gets those body parts moving, the heart pumping and blood flowing from head to toe.

There’s nothing more rewarding than seeing a child take hold of their own bicycle for the first time.

That’s certainly the power that keeps Jack and his crew going after all these years.

Note: The Park and Facilities Catalog is a supplier of bike parking racks, bike repair stations, vertical bike racks, bike room layouts and a supporter of Jack the Bike Man. We urge anybody with a used bike or in need of a bicycle to contact him or to look for a similar bicycle charity in their town.

One bike for a youngster can go a long way.