Posted by: Robert Caston November 20, 2019 in Parks and Recreation 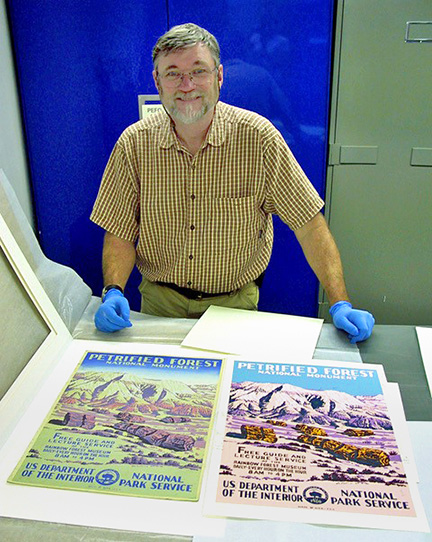 When Doug Leen was a park ranger for Grand Teton National Park in Wyoming, an iconic poster from the past caught his eye.

Ever since then he has been on a mission, like an archaeologist of national parks, to find or create those missing park posters.

In fact, he refers to himself as “Ranger of the Lost Art.”

Earlier in his life, before Doug became a dentist, he decided to spend a few years in the outdoors as a park ranger.

He worked at the spectacular Grand Teton National Park, America’s equivalent of the Swiss Alps.

While involved in an annual cleanup, he came across an old, dusty poster for the park tucked away in the corner of a barn.

Something about that nostalgic poster of those majestic mountains struck a note with him.

Upon further research, he discovered the poster was one created by artists back in the 1930s as part of the Works Progress Administration. That massive WPA program was established by President Franklin D. Roosevelt to alleviate incredibly high unemployment during the time.

The program put more than 8 million Americans back to work. They embarked on an unprecedented mission to build a huge number of public projects – 115,000 buildings, 78,000 bridges and nearly 700,00 miles of roads.

As part of that initiative, work was also issued to keep artists busy. Those artists produced more than 35,000 unique designs over an 8-year period. About two million posters were printed, promoting everything from health programs to travel to performances.

However, what’s amazing is that posters during that period were only created for 14 national parks. And only about 50 to 100 copies of each of those posters were actually printed. So, like the old poster Doug found in the barn, they are extremely rare.

Doug became fascinated by this artwork…and all the parks that were not included.

He had two goals.

One, to put on an Indiana Jones hat and try to find the missing park posters.

And secondly, to recreate poster art for other national parks using the same unique and beautiful style from WPA days.

Since he started out on his mission, he has made tremendous progress.

He has created artwork for more than 50 parks in the form of posters, cards and stickers. Those items are available on his website www.rangerdoug.com.

The process of creating a poster for a park is a lengthy one.

“I usually work with each park, visit the actual location and make sketches and photos,” Doug said. “I also peruse old park brochures and period marketing pamphlets if available.”

He then works with graphic artist Brian Maebius to come up with a design that is acceptable to current park officials. The poster also adheres to the distinctive look of the original WPA posters, which has a Bauhaus art style to them. Then the posters are printed using the original silkscreen process.

Ranger Doug was asked why he thought the WPA-style was so appealing.

“That’s a hard question. Retro has always been in – no matter what time period you look at,” Doug explained. “I’m really selling nostalgia. And our parks are the perfect vehicle or launchpad for poster art.” 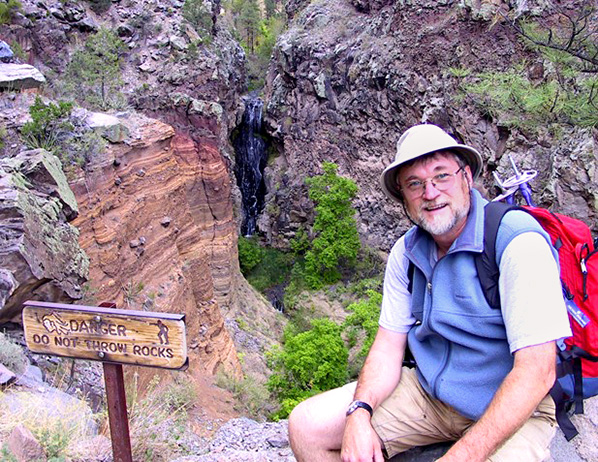 Doug Leen who has made it his mission to find or recreate national park posters.

Cooperation of national parks is essential

One of the challenges is in getting the parks to market these posters in their bookstores. It can be a laborious process.

Doug said he tried for 10 years to create a poster for the famous Haleakala National Park in Hawaii with its active volcanoes. But he was turned down several times. so he turned his attention to the adjacent park, Hawaii Volcanoes. He decided to create a sample design based upon an old lantern slide of the first time the volcano erupted in 1924. It was his most complex design. But the work paid off. Park officials loved it. The volcanoes poster became the top-selling one briefly after the Halemaumau Crater re-erupted for the first time since the 1920s.  Haleakala then stepped up to the plate and commissioned a design, which now is his No. 1 selling print.

As for the copies of the original posters, Doug’s hunt continues.

He has had some success.

Doug has uncovered 12 of the original 14 park posters.

Still missing are posters from Wind Cave and Great Smoky Mountain national parks. Ranger Doug is offering a $10,000 reward* if they are donated to the NPS Archives (*depending upon condition).  Incredibly, only 42 of the total prints of original posters have been found. They are extremely rare.

The hunt has certainly turned up these national treasures in strange places.

For example, 13 copies of the original poster for Bandelier National Monument were located after it was discovered they were used as file dividers in a drawer in a park office.

If you find an original park poster or a negative of one, give Doug a call.

If you want a poster of your favorite park in that famous WPA style, then visit his website.

As Doug said, these posters play a special place in the history of our national parks and monuments. The style of art represents the timeless nature of our glorious parks.

And the posters also represent a time when the nation was able to use human resources to climb out of hard economic times.

Our national parks are special. As you can see now after reading Doug’s “In Search of the Lost Poster Art” story, so are those WPA-style national park posters.