Posted by: Robert Caston May 2, 2018 in Parks and Recreation 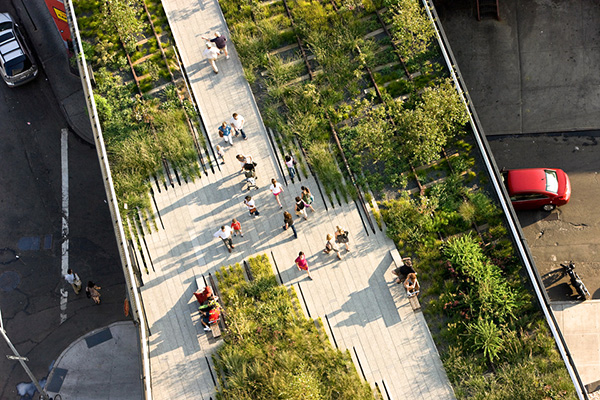 Aerial view of the High Line park in NYC, elevated 30-feet above the street and filled with greenery and unique park benches to take in the sights of the city. Source: Iwan Baan/Friends of the High Line.

Who would ever think you could take an old abandoned rail line, add some plants and park benches, and turn the space into one of the most visited parks on the planet?

That’s exactly what happened to the High Line park in NYC on Manhattan’s West Side.

Here are 10 facts that make this park so unique:

Sit on the park benches and enjoy varied views and landscapes

What makes the High Line park even more incredible, is that even for this small space, there are several unique stopping points along the way.

The High Line is a winner in terms of parks. Visit the area on a weekend and you will find thousands of people using the park. They are either walking, sitting on park benches to read, relax or chat or enjoying one of the 450 programs conducted there every year. Hungry? There are also several places to stop and eat. Nine seasonal vendors have reportedly sold 36,000 tacos and 76,000 gelatos. And of course, you can always walk down the stairs to street level and find an interesting restaurant, retail shop or other place to visit.

There’s a bigger picture involved when talking about the High Line.

Experts predict more and more people will be flocking to urban areas in the future. That’s where the jobs are. That’s where young people want to live for the nightlife, restaurants and entertainment.

Rents in most urban areas are already sky-high. The demand for more housing is already intense.

With all this development taking place, where is a city going to find space to build more parks?

That’s where the concept of linear parks, like the High Line, come into play. 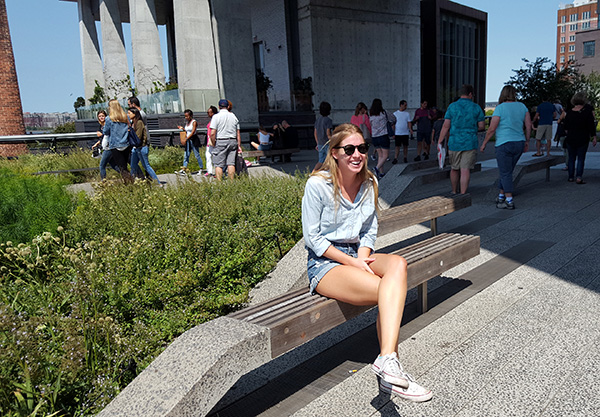 One of the park benches scattered throughout the High Line with the “peel up” design.

You don’t need a big square chunk of land like you find in most cities, including New York City’s massive Central Park – an area that covers 843 acres with 25,000 trees and 10,000 park benches.

In fact, one of the latest movements by groups such as the Trust for Public Land, is not to provide one or two giant parks, but to be sure there is at least some parkland with inviting landscaping and a few park benches with a minimal 10-minute walk for urban residents.

(In fact, the Trust has created a searchable database called ParkServe, where a person can see how their city ranks for providing accessible parks and identifies areas where perhaps a park can be built).

The whole High Line concept is not just unique to New York City.

In Miami, there is a movement started by local citizen Meg Daly to create a series of interconnected parks under the Metrorail line that weaves throughout the city called The Underline. This is another example of melding existing structures with parks. In this case, the city would take advantage of the shade areas created by the elevated rail line above and create a 10-mile long linear park.

Similar parks exist elsewhere in the country: the 606 in Chicago; the Beltline Trail in Toronto; the Katy Trail in Dallas; the Old 11th Street Bridge in Washington, DC; Railroad Park in Birmingham and the Reading Viaduct in Philadelphia.

The other point here is that if city residents want more parks, they will probably have to be the impetus to create those parks.

Find an abandoned lot or railroad trestle. Talk to city officials about creating a park there. Form a non-profit organization and get your neighbors involved.

Encourage the city to research the extended benefits of adding parkland. As you can see from The High Line, there’s more to a park then just grass, park benches and trees.

There are the millions of dollars in development that can take place near a popular park and then there are the economic benefits of attracting all those visitors who will also spend money in local restaurants and stores.

Start a fund-raiser to help supplement the cost of converting the land into a safe, usable space and adding park amenities such as park benches, picnic tables, playgrounds, park grills etc.

Do something to make the space unique – add artwork (there are plenty of local, talented artists in every town). You can even create unique sidewalk art with custom bike racks. These outdoor bike racks can literally be made into virtually any shape and at the same time provide bicycle parking.

Adding a micro-landscape in your town with interesting plants, park benches and artwork might not create an “Organic Disney World on the Hudson,” but it can turn a wasted space that is an eyesore to a welcome place that citizens can enjoy and lift up the surrounding areas.