Posted by: theparkcatalog May 11, 2016 in Parks and Recreation

These plastic bottles don’t need to be here – they can become recycled plastic picnic tables and any number of products.

About 270 million Americans visit national parks each year. They explore mountains and woods, see wildlife firsthand and discover culture. But along the way, they also generate 100 million pounds of trash. That’s could fill quite a few recycling receptacles and park trash cans.

What can be done to solve this problem where visitors come to a park to enjoy the natural splendor but generate more than a third of a pound of trash per person?

While it may seem unexpected for an auto maker to be involved in environmental issues, Subaru’s company practices are very green. In fact, Subaru is America’s first zero-landfill auto maker, meaning that all waste is either recycled or reused, which is quite impressive when you really think about how much waste they probably generate.

Using their expertise in recycling initiatives, Subaru sent experts to the three national parks to analyze current recycling practices and advise them on how to improve. 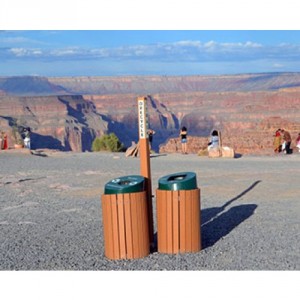 Denali National Park in Alaska fills a landfill with 220 tons of trash annually. The amount of visitors to the park has grown in recent years since it only had 15 tons of trash in 1995. As the landfill continues to fill, its remote location makes recycling very difficult, with park employees driving recyclable items several miles into town. They always seem to be running out of space in their cars to transport all that needs to be recycled.

In its web documentary series “Who We Are is What We Leave Behind,” Subaru says that its zero-landfill practices can be enacted at the national park level to prevent landfills from overflowing with trash.

One of the biggest changes facilities managers can make at local or national parks or even small businesses is increasing the number of recycling receptacles available. Placing the recycling receptacle next to a park trash can is especially helpful for preventing guests from needlessly filling up the landfills.

One study found that placing the recycling bins closer to the point of consumption greatly impacted recycling behavior and was highly effective. The office in the study originally had a central recycling location, but expanded their recycling with desktop recycling bins.

The results were very positive. Paper recycling jumped to an 85-94% recycling rate, far outperforming the office’s previous rate of 28% recycling. Follow up research found that the recycling rate rose again, up to 98% at its peak. It’s clear that strategically placing more recycling bins can help encourage recycling at your facility. 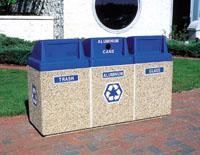 How else can you help? Whether a park operator or visitor yourself, there are plenty of ways to keep some of our nation’s most picturesque locations from becoming littered with trash.

Only use green or reusable items like refillable coffee cups, items with compostable packaging, and reusable bags and water bottles.

To boost recycling at your facility or cut down on litter, check out the variety of commercial trash cans, recycling receptacles and other products sold by The Park Catalog.