Posted by: Robert Caston May 13, 2016 in Parks and Recreation 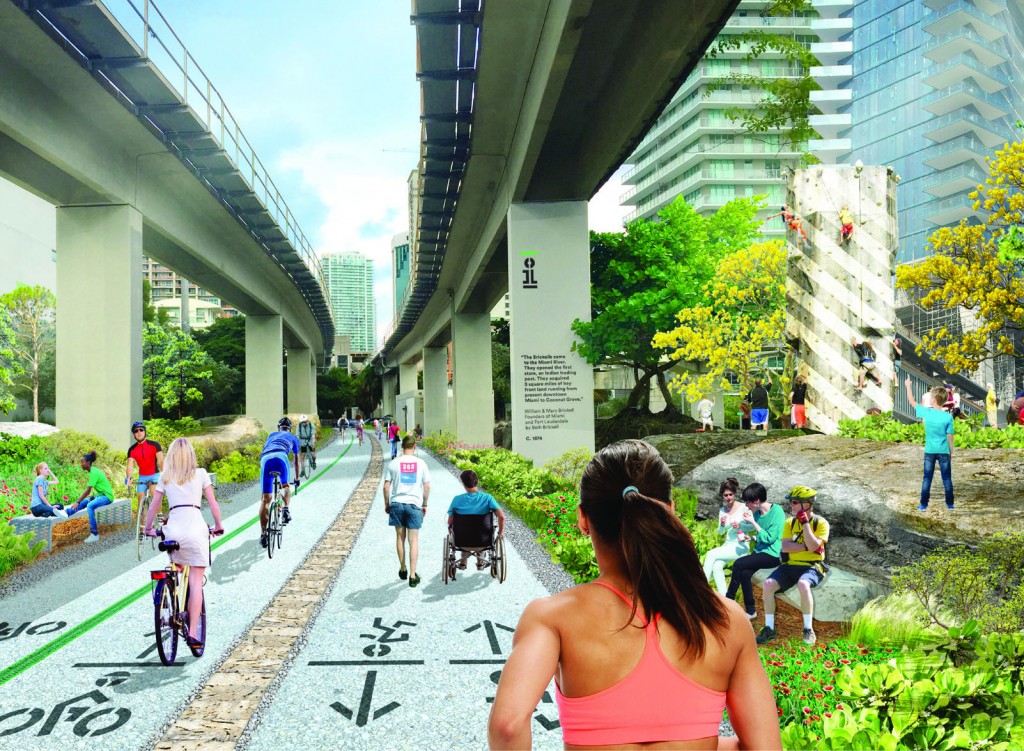 Meg Daly walked home from a train station in Miami one day and had an inspiration that could change how people look at parks in the future.

First of all, she wasn’t looking at the ground. She looked up. At the Metrorail mass transit line running overhead and realized that the concrete structure holding the tracks created a nice shady spot below.

For anybody who has ever lived or visited Florida, you know shade is precious. Meg had an idea – if there are miles of shade underneath Metrorail, wouldn’t this make a great elongated park where people could walk, bicycle or relax?

“I lived in Miami my whole life and never really experienced that moment under the Metrorail. In that moment I realized just how much land was there,” she said. “I thought, ‘Why don’t we do something spectacular with this space and return it to the people?” 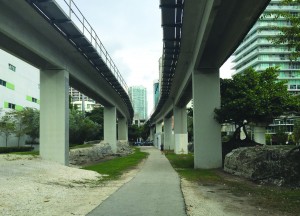 Fast forward a few years and now Meg heads the private side of a project to create a park called the “The Underline.” When completed, it will be a beautiful 10-mile stretch of native landscaping and an urban trail weaving through three cities, numerous neighborhoods and directly under the train.

She is working in conjunction with the Miami-Dade Department of Parks, Recreation and Open Spaces which directed the design vision for the project and will oversee the project development and construction.

“This project is the result of a public/private collaboration between Miami Dade County Transportation, Public Works and Parks, the Recreation and Open Spaces Department and Friends of the Underline,” said Maria I. Nardi, Assistant Director of Planning and Design Excellence, who noted this project is part of the Miami-Dade County Parks Masterplan Greenway network that consists of 500 miles of trails and connected public green spaces.

She pointed out the project not only takes under-utilized land and connects residents to rail and other attractions, but it “represents the transformation of the US 1 corridor through a linear park-like public realm.”

There will be plants, lighting, seating, artwork and more. It’s essentially a giant makeover of all that land under and near the tracks. With an average width of 100-feet, when you add up all the space, it’s over one hundred acres.

The concept is brilliant. Think about the implications. Land in cities is always at a premium. Very expensive to buy. Costly to develop. And while a park may be accessible by everyone in a city, in reality only the people living nearby actually use it for the most part.

But with a concept such as The Underline park a large part of the population will have a piece of this park in close proximity to them. It’s a “linear park.” This necklace of green will have park benches, walking trails, bike trails, bicycle parking racks and other park amenities stretching for miles throughout the city.

A person can bike for five miles on the trail or they can sit on a park bench in the shade and read a book. The park will stretch all the way from the Dadeland South Station near the mall up past University of Miami station to the Brickell Station, where people can then access the popular Bayside Marketplace on the water.

“We’re sort of creating a separate, off-road highway for bicyclists and pedestrians,” Meg pointed out.

Not only can they walk and bike, but they can also stay out of their cars. Because not only is there plenty of heat in Miami, but there are way too many automobiles clogging those streets.

It was that crazy traffic that sort of kicked off her involvement in this project in the first place.

Bike accident will result in The Underline park trail for bicycles 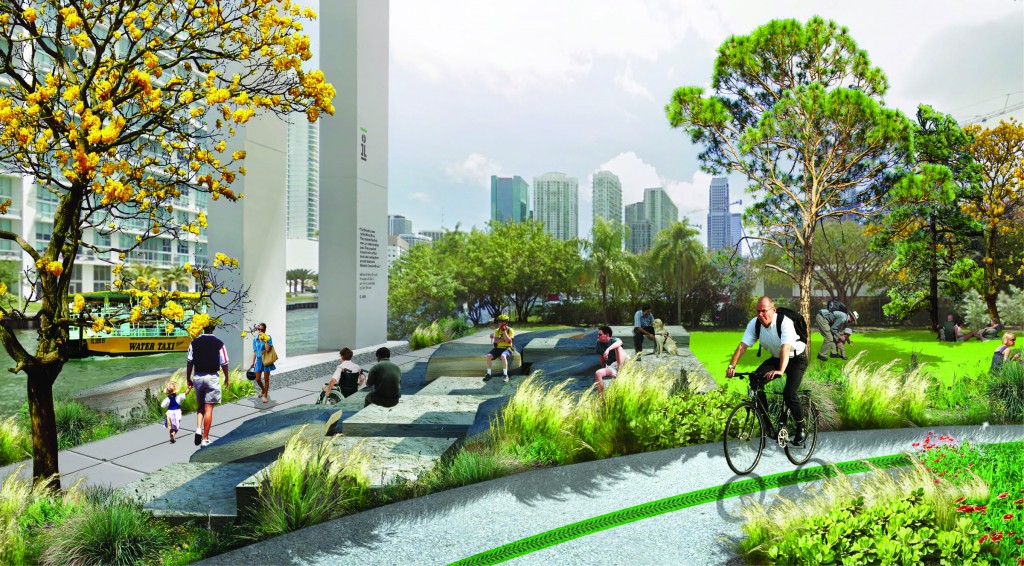 Meg is a retired marketing executive. One day she was riding through town on her bike and had an accident. Broke both her elbows. Ouch.

Since she couldn’t drive, she had to elicit rides from her husband or friends to get to physical therapy. Breaking your elbows might be painful, but driving in that area is a pain as well. So she started riding the Metrorail. That’s when the inspiration hit her to do something with all the unused space under the tracks.

She began talking to people. From the county, she talked to Miami-Dade County Parks, Recreation & Open Spaces Director Jack Kardys and head of planning Maria Nardi. Folks at the University of Miami became interested. The School of Architecture dedicated three studio classes to the effort and eventually they gave her some office space.

Next thing you know, they have a ton of park representatives, local officials, hospitals, planning departments and other influential people all very interested in The Underline park. Funding sources include the cities of Coral Gables, Miami, South Miami and Miami-Dade County.

Partners include Miami-Dade County Parks, Recreation & Open Spaces Department (which will actually build the park), Miami-Dade County Transit Dept., the John S. and James L. Knight Foundation, among many others.

There are endorsements from a varied group such as The League of American Bicyclists to the Florida DOT to Vizcaya Museum and Gardens. A long list of organizations are excited about this project.

Friends of The Underline park selected James Corner Field Operations to create the master plan. They have an economic impact study done and with the help of volunteers, they have held about 35 events to raise awareness and funding. In less than two years they raised an astonishing $5 million.

“This is the fastest implemented urban trail and park initiative in the country,” she said.

Be sure, this is a huge undertaking. The estimated budget is $110-$120 million. We’re not just talking about mowing some grass and pulling up some weeds. This will be a major transformation of more than 100 acres of ground nestled in between concrete columns, roads and intersections.

To do it right and to make the connected parks safe, Meg said there will be major renovations built at about 30 intersections with an estimated cost of $20 million. Walking or bicycling in some areas can be extremely hazardous. Florida leads the nation in deaths to bicyclists. Miami is ranked fourth for most dangerous places to walk in the country.

There will be two separate trails – one for pedestrians/joggers and one for bicyclists. That will also make for safe transit. 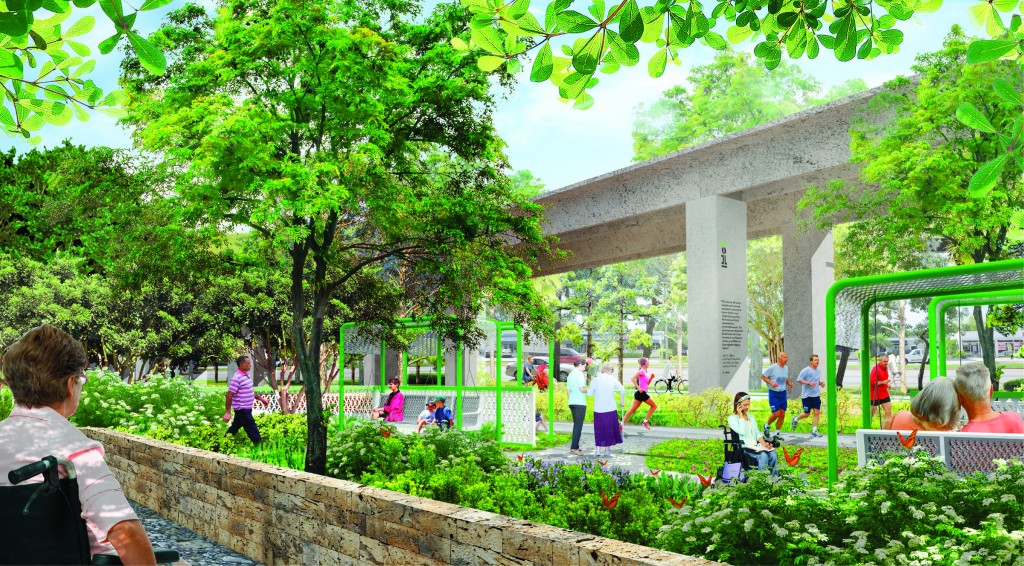 One enormous and very appealing feature of The Underline park that is sure to attract not only national, but worldwide interest, will be the art installations.

Meg said the project plans to spotlight a bunch of outdoor artwork – sculptures, paintings, etc. Pieces that could transform bland plots of ground under a Metrorail line into exciting mini-museums.

Art attracts attention. Display some exciting artwork, and people from around the world will be interested in checking it out. Those tourist dollars are a welcome asset for any major city.

Speaking of economic impact, the park is still in the development stage but residential developments near the proposed Underline route are already taking place. Research shows that being located near a park will substantially increase the valuation of a property. As much as 25% nearby and even 5% further away. Higher property valuations also means more tax dollars for the city.

New residential developments are already springing up near where the linear park will be located and Meg points out, “the focal point being The Underline.”

When you add it all up, their research estimates there is already a $3 billion boost in real estate development along the corridor where The Underline is located. That’s huge.

“What it’s done with real estate alongside is just mind-blowing,” Meg said. “This is an economic engine disguised as a park.”

Similar parks use the same concept

According to Meg, there are other parks around the world that use a similar “linear” concept. For example, there is the High Line in New York City that was created over an old rail line (seems to be a similar theme here with rail).

In fact, the company that developed the High Line, James Corner Field Operations, also developed the master plan for The Underline park. Their motto – “We are landscape architects and urban designers committed to the innovative design of public spaces.”

Speaking of innovative, one huge feature of The Underline is that there are no land acquisition costs. Zero. Working in conjunction with Miami-Dade Transportation, the project basically takes that underutilized land set aside for the rail line. What an enormous savings.

The way Meg sees it, there are “five buckets of interest” overall in terms of benefits the Underline will bring.

First, there is the economic impact. That is already happening with properties near the proposed route of The Underline.

Third, The Underline park will encourage alternative forms of transportation. Every citizen in Miami will agree – the city absolutely does not need more cars filling up their streets. Give people other ways to get around. With The Underline, it will be much easier to bicycle from point A to point B through the most popular parts of the city. It will also be easier to walk.

And, the journey to the nearest train station will now be more appealing as pedestrians walk through these oases filled with landscaping and artwork. The savings to a city in terms of highway construction could be monumental. Billions.

Then the fourth bucket is the artwork. Appealing sidewalk art creates a better experience for local citizens. Attracts tourists. Supports artists. Helps promote the city as a vibrant, culturally-active place to live and work.

Finally, the last item in the bucket is the creation of more usable green spaces. In an area stuffed with concrete, green spaces are like little jewels of nature and fresh air for urban city dwellers. You cannot create enough of them. With space so expensive, it is very difficult to create just one of them. Let alone a 10-mile string of parks.

Maria says she anticipates they will break ground on the project in 2016.

If they do, it will be an amazing fast-track effort for a project of this magnitude.

“Even if we get a shovel in the ground and dig up just one cup of dirt, I’m going to be celebrating,” Meg said.

Who would ever think two broken elbows would help drive acre upon acre of fun green spaces, artwork, bike trails, walking trails, park furniture and just an overall revitalization of space carved out of the concrete and asphalt landscape in one of America’s largest cities?

Meg actually has no experience in urban planning and she volunteers all her time.

“I just had this crazy idea,” she said.

Talk about turning lemons into lemonade.

“This is just a legacy project for me and my family. Hopefully my name won’t be on it and I will be forgotten,” Meg said. “I just want to see people using it one day. And I will know I helped make it happen.”

Maria said, “We’re glad to have a park champion like Meg to help us implement this project.”

To learn more about The Underline park click here.

The Park Catalog is an advocate for parks and provides park benches for sale along with, bicycle parking racks, park trash cans and other outdoor site furnishings.